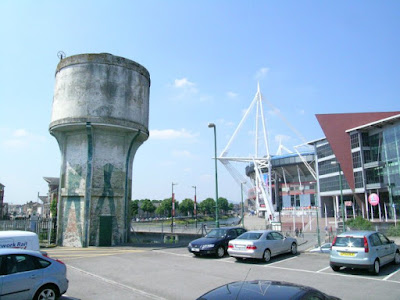 I wondered where all the money for the Tourism Product Innovation Fund (TPIF) had gone to -- and now I know at least a part of the answer.  The list of new supported projects for 2017-19 has now been published, and one of the successful ones is this:

This project will celebrate the Year of Legends and Year of Sea. It will document an already externally commissioned/funded tour of Wales visiting towns/villages/sites associated with myths and legends of Wales, many of which will be coastal. The audio-visual content will feed into the Land of Legends digital platform. It also seeks to paint an iconic Mabinogion inspired design by high profile, world-renowned artist Pete Fowler on the Cardiff Central Railway Station Water Tower. The 50ft, Grade II listed 1930’s Water Tower is highly visible as you enter the city by train, along the River Taff, from the south end of the Principality Stadium and from the new Cardiff Central Square development. We already hold planning permission for the mural, meaning works can take place in May 2017 prior to Champions League activity and last through 2018 and 2019.

This funding -- for an unknown sum of money -- has come from the Business Wales tourism budget, and it shows just how far Literature Wales has strayed from its original brief of supporting Welsh literature and Welsh writers.  It now sees itself as a tourism operator and commissioner of audio-visual presentations and artwork....... and I wonder how much time has been devoted by staff to the dreaming up and completion of this application for funding and to the application for planning consent?  No wonder the organization has no time for the updating of the Welsh writers' database -- terribly sorry, all you writers out there, but we have cunning plans, and far too much to do......

Why did the Chairman and Management Board not step in and ask what this had to do with the core functions of the organization?  More to the point, is it appropriate for one part of the Welsh Government establishment to hand monies to another part of the establishment?  That, presumably, was not what TPIF was intended for.  Since when is Literature Wales a "tourism operator" or "tourism sector partner"?    This is all far too incestuous for comfort, and it's high time somebody (Minister Ken Skates, for example) stepped in and put a stop to it.

I have been checking to see whether Literature Wales is entitled to TPIF funding as a "third sector" organization.

Let's start from here. Arts Council Wales (ACW) funds LW and it has been part of its portfolio of Revenue Funded Organisations (RFOs) for some years. ACW treats LW as a national company responsible for developing and promoting literature.

Literature Wales describes itself on its web-site as follows:

LW therefore flags itself up as a national company and as a national agency — it would not have been allowed to use those words without specific Welsh Government consent.  It acts on behalf of the Welsh Government.  It is therefore not “independent” in the meaning of the documents defining the Third Sector, and it was not set up voluntarily by well-meaning people.  Without large-scale public funding it would not exist.  There is no democratic accountability, no membership list and no transparency or involvement by supporters in management board or staff appointments.

LW cannot have its cake and eat it.  It is clearly not a Third Sector organization, and in my view it should not have applied for TPIF funding.