The deadly game of Cnapan 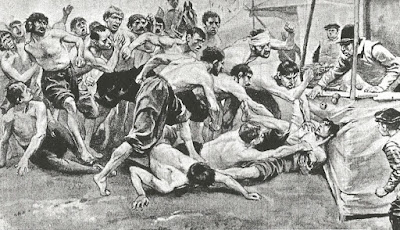 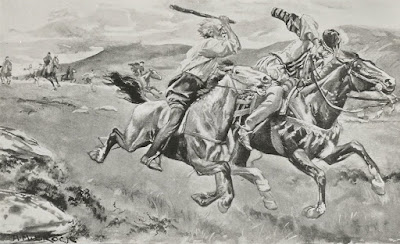 As readers will know, the game of Cnapan features large in the Angel Mountain stories -- and indeed they are associated with the greatest tragedy in Martha's life, since her husband David is killed during the annual Cnapan contest on  Berry Sands (Traeth Mawr) in February 1805.

These wonderful illustrations by HM Brock were first published in an article by AG Bradley, called "A Welsh game of the Tudor period" in The Badminton Magazine, Jan- June 1898, pp 512-524.

Here is an extract from Ch 10 of "Martha Morgan's Little World."

The ancient game of Cnapan, which features over and again in the pages of the Saga, has fascinated local historians, and students of the history of sport, for many generations. It has a strong claim to being the real precursor of rugby union football, although in some respects it seems to have been more akin to modern American football. George Owen, whose delightful description of Cnapan is justly famous, believed the game to have been invented by the Trojans or ancient Britons. This speculation is not as unreliable as we might think. Indeed, it is known that the Romans played a ball game called "Harpastum" which involved both carrying and scrummaging, and they also invented a game called "Soule" which survived in Brittany until 1870. It is therefore not beyond the bounds of possibility that the origins of Cnapan go back 2,000 years or more.

Where did the name come from? In north Pembrokeshire Welsh dialect the word "cnap" meant a lump. In the 1800's the word "cnappan" was used in south Cardiganshire as a verb meaning "to knock" or "to hammer away at" a person; and in Cilgerran a small section of the cliff on the edge of the Teifi gorge is known locally to this day as Gardd-y-Cnappan. Cnapan was the word given to the ball used in the game; it was made of solid wood, and was somwhat larger than a cricket ball. And just to make things interesting, it was boiled in tallow in order to make it slippery and difficult to hold! The object of the game was to smuggle or throw the cnapan, by one means or another, to the opposition “goal”. In the cross-country games this goal might be the porch of the parish church, and in games on the beach it might be a wooden pose stuck in to the sand. The labourers played on foot, and the gentry used horses; and that must have created many extremely dangerous situations. The foot players were allowed no implements or weapons, but the gentry were allowed to use cudgels or sticks, no doubt intended for striking the ball but actually used for striking opponents instead! On the great “Cnapan Days” there might be a thousand players on each side.

Clearly the game was both popular and widely played in Elizabethan North Pembrokeshire, and it was a famous spectator sport as well. The main matches were occasions for huge gatherings of local people and for merchants pedlars, and traders from far and wide who would assemble to sell food, drink and other wares. They were also social occasions for the local gentry, who would turn up both to see and be seen. There was a lot of gambling. And just as modern football managers share in the glory of their successful teams, the local gentry who acted as matchmakers saw Cnapan games as important occasions for enhancing both their sporting reputations and their social status.

By the late eighteenth century the game of Cnapan was being played in a somewhat debased form. There were worries about the increasing violence of the game and the lack of respect among players for its written or unwritten rules. The use of staves and cudgels and the involvement of horsemen among the foot-players must have led to frequent injuries. And the sight of broken limbs and bloodied bodies on "Cnapan days" must have caused considerable concern. Henry Vlll had attempted to ban the game in Tudor times, and now the clamour for it to be declared unlawful increased. But it was none too easy to prohibit traditional games in the remote rural districts, especially those which were played on the great holiday or feast days. After all, those who worked on the land had only six or seven days during the year on which they could really enjoy themselves. So the decline and fall of Cnapan was probably related not so much to new legislation or safetyu concerns as to changing farming practices. Over a long period of time the ancient north Pembrokeshire landscape of open farmed fields and extensive common lands was transformed by the process of enclosure. Landowners built hedges, walls and fences in order to demarcate their territory, to provide shelter and to contain their stock. As pointed out in Chapter 7, many of the common lands were illegally gobbled up in the process, and the losers were the smallholders and peasant farmers who had depended on these lands for grazing their animals. Another loser was the game of Cnapan. Whereas it had previously been played across miles of open countryside, the game could now only take place on sandy beaches such as Traeth Mawr, Newport, or on smaller open spaces owned by members of the gentry who had sporting inclinations. Under this inexorable pressure, the game was eventually killed off in north Pembrokeshire. With the aid of a few colleagues I tried to restart the game (without the horsemen and the cudgels!) in 1985 with an annual contest between Newport and Nevern. We had a lot of fun for ten years, but then we had to abandon the game because we could not obtain insurance cover.

In each team there were three sorts of players: “Of the first part there shall be sturdy gamesmen who shall remain in the throng or main body of the game. Of the second part there shall be scouts or fore-runners who shall be exceeding fleet of foot and who shall always strive to keep before the cnapan. Of the third part there shall be borderers who shall remain at the edges of the play. These borderers shall seek by surreptition to snatch the cnapan from the contary party, and shall hinder those who break from the body of the game and who would transport the cnapan towards the cnapan post. It is said that the gamesmen of the main throng shall be men of strength in disputing, boldness in assaulting, and stoutness in resisting; the scouts or forerunners shall be lusty hurlers of the cnapan and also men of agility and good footmanship, able to fly swift as an arrow and be able to show skilful deliverance of the cnapan to those that be with them; and the borderers shall with wondrous invention prevent those who run against them, leaping upon them without fear to take them out of the game.”

There were great scrummages involving the “sturdy gamesmen” or forwards, and if the game was stopped for any reason it was restarted by throwing the ball high into the air so that it could be caught by a man leaping high. No kicking of the ball was possible, so this game was not like the primitive “street football” contests that occurred in many parts of the British Isles. But there were so many similarities with modern rugby football that Newport in Pembrokeshire lays a good claim (better than Rugby School, at any rate) to be the place where rugby really began.

In the Saga I have based my descriptions of the game, and of what went on around the edges of it, quite closely on George Owen’s old account. I knew right from the beginning that David’s violent death would have to take place on Traeth Mawr, at the water’s edge, at a time when Martha, and the reader, might least expect such a tragedy.
at March 14, 2019

WHS bestsellers -- things are not quite what they seem..... 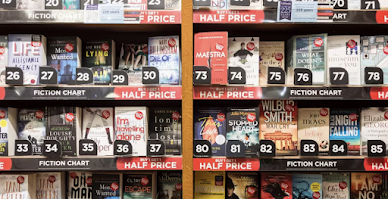