Is literary tourism a problem? 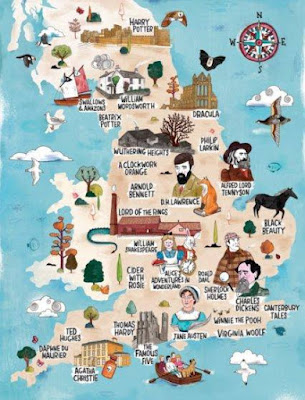 This is an interesting article in the Wales Arts Review, in which Emma Schofield discusses "the problem with literary tourism."

She starts off by talking about the furore (yet another!) surrounding the publication of a jolly map by Visit England, designed to flag up some of England's literary places and connections.  That was all very well, until certain other parties started to use the map and called it "the literary tourism map of Britain".   The problem with that was that the map chopped Scotland off, did not have Ireland on it at all, and had Wales shown as a place where some trees grow but where there is no literature.

Visit England should have seen it coming, and putting trees but no literature on the map of Wales was crass, and deserved condemnation.  Anyway, there are other maps of Welsh literature (or some of it) like this one: 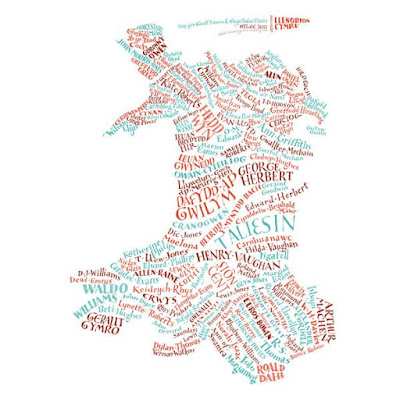 This map is a piece of private enterprise, and the people who made it promote it as THE Literary Map of Wales.  It is not that at all, of course, since it is highly selective, and they have only managed to fit in SOME Welsh writers.  God only knows how the choice of writers was made.    Let's just call it A Literary Map of Wales, accepting that there can just as well be several others......

Coming back to Emma's article, what is her point?  It seems to be that it is a mistake to reduce an appreciation of Welsh literature to points on a map, or to a few "chosen places" with literary links.  I don't agree with her.  You are never going to get rid of a sense of place, especially in Wales, where we have this thing called "hiraeth".  Of course we all like to think that Wales is a country where great literature is in the air we breathe; but when people are on holiday they are not looking at something over the far horizon or trying to identify an aura.  They are looking at what is in front of them, and if one of the functions of Visit Wales and the regional tourism authorities is to enhance "the visitor experience" then I see no harm at all in flagging up all -- or any -- of the things that make the landscape in front of you interesting or valued.  That may be the local geology, or historic features like castles and cromlechs, or even a house in which a great writer lived.  I have no problem with any of that.

I do agree with the point that it all gets rather messy when we include in these targetted "persistent places" or "special places" things which have only the remotest connection with Welsh literature -- like a holiday cottage once stayed in by William Wordworth, or a place where Dylan Thomas's great aunt once lived, or a place that gave Beatrix Potter the inspiration to write about a rabbit, or a place where one scene from a film about Harry Potter was shot..........

Sadly, the Literature Wales web site called "Land of Legends"  (which has many good things about it) falls squarely into this trap, investing all sorts of places with significance on the most insignificant of literary connections.