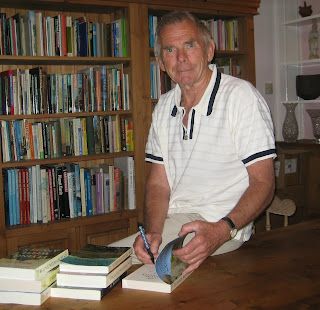 Doesn't time fly when one is having fun?  A tenth anniversary has crept up on me...... with the realization that it is ten years since the first publication of "On Angel Mountain".  Since then, lots of reprints, six new volumes (and another on the way) and a short-lived and rather disastrous episode involving Transworld and Corgi -- which taught me that big publishers are not necessarily any more efficient than little ones, and that in certain circumstances (such as mine) you are better off just doing it all yourself.

Anyway, with total sales of the series now nudging 60,000, and with something like 25,000 copies of "On Angel Mountain" sold in all editions, I suppose I should be reasonably pleased.

Planning a few things to celebrate the tenth anniversary -- watch this space!


Posted by BRIAN JOHN at 12:59 No comments: Links to this post

Plans are now well advanced for the inaugural book festival at Rhosygilwen on 18th September.  There will be 30 trade stands in Neuadd y Dderwen (the main hall) and 26 speakers in all, giving shorter and longer talks and participating in "conversations" with other authors.  Three venues will be in use -- the Conservatory in the mansion for keynote addresses and other talks; the bar, mainly for poetry events; and the summer house in the mansion grounds for childrens' and family events.  the summer house events are free, but there is a charge of £5 each for the conservatory and bar events.  A Festival Pass, costing £10, will give free access to as many of the events as you can physically get to;  that has to be good value, and Festival Passes can be purchased in advance and on-line by going to this web page:

There is already massive interest in the festival, and we are convinced that we will have an excellent turnout from book-loving people from across West Wales.
Posted by BRIAN JOHN at 13:30 No comments: Links to this post

We will be taking a stall in Neuadd y Dderwen for the day of the festival, Sunday 18th September 2011.  The hall will be buzzing -- 30 stalls taken by publishers, journals, booksellers, agencies interested in literature, and groups of authors.  Entry to the "book fair" part of the festival is free.

I'll be on hand to talk about the Angel Mountain Saga and my other books, and to sign copies, apart from the times when I shall be away on "official duty" -- for my pains, I'm Chairman of this one, although it would be nice if somebody else will take over for next year....
Posted by BRIAN JOHN at 13:14 No comments: Links to this post

The profile is an unusual one -- there is a long tradition of the mountain having the profile of a reclining woman, but from the south and SE the profile is very different indeed, with head to the left, breast, rib cage and raised knees.  And of course, it is this profile -- or the other one -- that is responsible for the tradition that the mountain has something to do with Mother Earth, or the Earth Goddess.

http://www.greenstagegallery.co.uk/artist/76/sonya-dawn-flewitt
Posted by BRIAN JOHN at 04:23 No comments: Links to this post 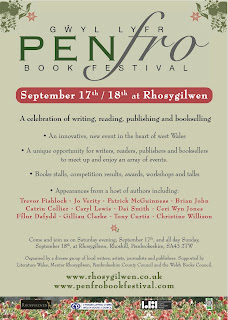 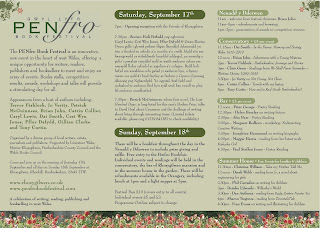 For my pains, I'm chairing the organizing committee for this inaugural Book Festival at Rhosygilwen on Sunday 18th September.  Much more info here:

Keep an eye on the web site for developments.  It's updated almost every day.  leaflets are going out this weekend, and media coverage will slip into gear at the beginning of September.

Click on the images to enlarge them -- and if you go to the web site you can download PDFs of both the poster and the programme.

Posted by BRIAN JOHN at 04:58 No comments: Links to this post