This is a very interesting and quite detailed article in the Journal of the Pembrokeshire Historical Society.  It's written by Gwenllian Awbery, who has worked a lot in the past on the strength and distribution of the Welsh language in Wales.  I'm not entirely sure when this was published.........

Note that sometimes we see the spelling "Dimetian" and sometimes "Demetian" -- but you will see from the article that the dialect was quite widely used, and it is not at all beyond the bounds of the possible that a lady such as Martha might have used it as her "private language"..........

Rebecca Riots, Ceffyl Pren and the age of innocence 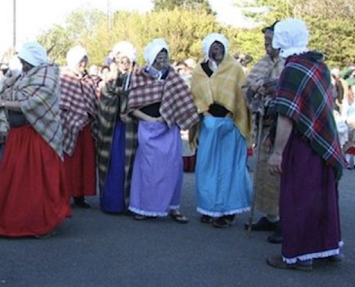 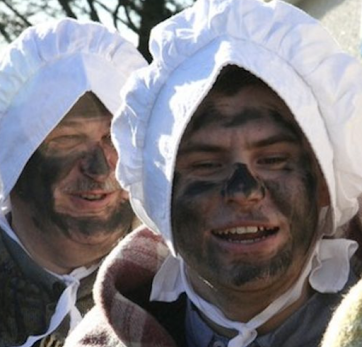 I have just been reading about the Carmarthen celebration (on May 1st) of the Rebecca Riots, in a somewhat strange artistic event in which three men dressed up as "female" rioters -- without a blackened face in sight.
This was in contrast to the 2014 celebrations in Efailwen:
https://www.bbc.co.uk/news/uk-wales-south-west-wales-27375757

Eight years ago, the BBC website covered the event, and published photos of men dressed in female garb, and with blackened faces and white linen bonnets.  That was fine, and was a pretty good representation of what went on in the Rebecca Riots and the Ceffyl Pren tradition that pre-dated the riots and continued for some time afterwards. It needs to be emphasised that the blackened faces had absolutely nothing to do with racism or racial stereotyping, and everything to do with hiding identities.  All of the rioters must have been familiar with the idea that (like chimney sweeps) black-faced men emerging from the west Wales coal mines at the end of their shifts were none too easy to recognize -- and so the tradition of blackening faces went along with the costumes and the straw hair, the bonnets and the aprons to ensure that bystanders could not put names to faces.  And it worked -- very few rioters were ever brought to justice.

I can fully understand why the word "nigger" has effectively been banned from the English language, and why people on radio and TV nowadays refer obliquely to "the n-word" instead.  There is great sensitivity out there, and political correctness is everything -- while at the same time there is greater and greater tolerance of verbal obscenities, with swearing now so commonplace that it has become more than a little sickening........

Up on the Mountain 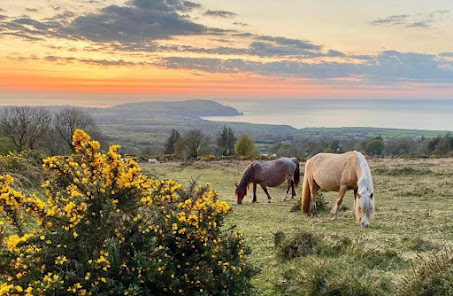 Credit: Bancyreithin holiday cottage & vintage caravan
at May 04, 2022 No comments: 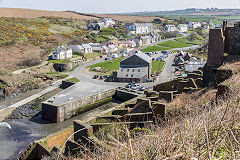 A lot was going on in Pembrokeshire in the first part of the Nineteenth Century, when Martha Morgan was in her prime.  Plas Ingli and the estate, and Martha's life, were not much affected by the process of industrialisation, but now and then its effects appear in the stories.

Wilmot Gwynne, when he appears on the scene, has made his fortune in the copper industry of the Swansea area, and of course the theme of "Guardian Angel" is all to do with the voracious appetite of the iron industry monster -- which comes too close to home for comfort.......

Anyway, fascinating short summaries and great photographic illustrations are contained on this web site.  Well worth a browse........

We are climbing Angel Mountain 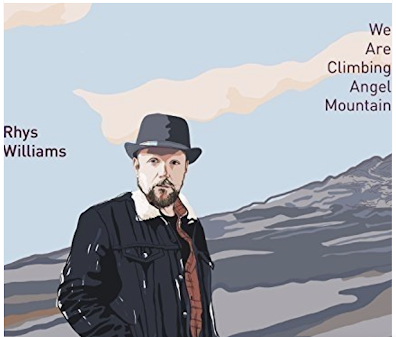 I came across this rather splendid album from singer Rhys Williams, featuring Angel Mountain in the title and main track.  A great voice -- and his diction is excellent.  I hope the record becomes a great success for him........

You can also find the tracks on Spotify, by putting "We are climbing Angel Mountain" into the search box. 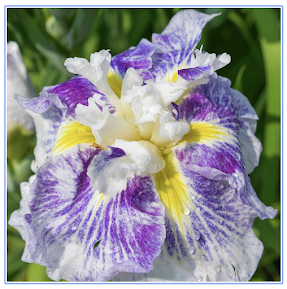 Not everybody knows this, but there is a gorgeous Japanese iris (you can get it from commercial growers) called "Angel Mountain".  Was its breeder inspired by Martha Morgan and her adventures?  Probably not, but it's a nice thought........
at April 23, 2022 No comments: 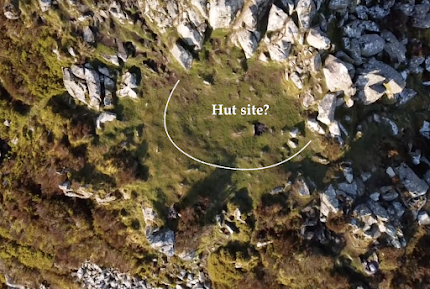 Many thanks to Hugh Thomas for publishing this image in his recent drone footage of Carningli -- published on Preseli 360.

It shows the very subtle semicircular "bank" of stones around the edge of the grassy hollow on the summit of the mountain.  According to legend, this is where St Brynach communed with the angels. It is quite possible that there was a rough shelter here, using the rocky outcrops for half of the circle and a little bank of boulders and stones for the other half, maybe with roof of supporting branches covered with rough thatch or bark and turfs.  Maybe it was horizontal, or maybe sloping.

There have been no excavations here as far as we know.  But there has been intermittent occupation of the mountain down through the centuries -- so a shelter here could be Bronze Age, or Iron Age, or from the Age of the Saints, or even from the Middle Ages.  Maybe it was even built and rebuilt many times....... by people who needed to be up here for one reason or another......

To Paradise and Back

This is the web site devoted to telling the tale of the Hoole / Stephens family, as far back as we can trace it.  Many people have contributed to the collection of information.  Some of it is true, and some of it is probably mythology.  Maybe we will never know the full truth -- but it is an extraordinary story nonetheless.....

My mother Gwladys John (then Stephens) was born in Port Elizabeth in 1906, and her family returned to Wales in 1915. 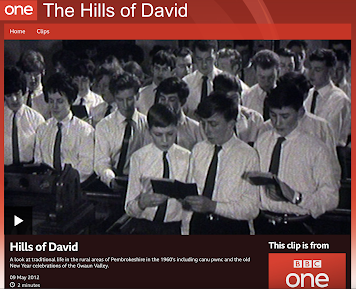 I thought this was lost for ever, but the BBC has kept this on the archive, and has made it accessible online, here:
https://www.bbc.co.uk/programmes/p00s7zzq
It's from a programmes called "The Hills of David", first transmitted in the 1960's. I think the first part (the Pwnc) was filmed in Jabes Chapel, and it's great to see the boys and girls singing the Pwnc with such clarity and confidence.  The second part was filmed in Ffynnondici Farm, and captures the Hen Galan celebrations very nicely.
Some familiar faces in there........
at February 28, 2022 No comments: 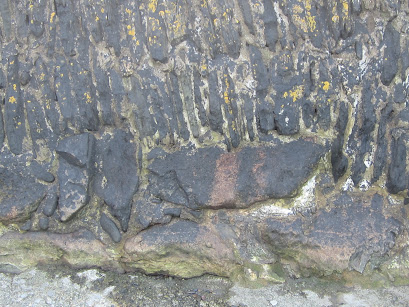 Erratic boulders of dolerite were used in the earliest phases of sea wall construction, to provide a solid foundation. 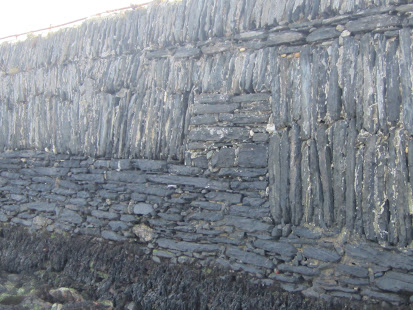 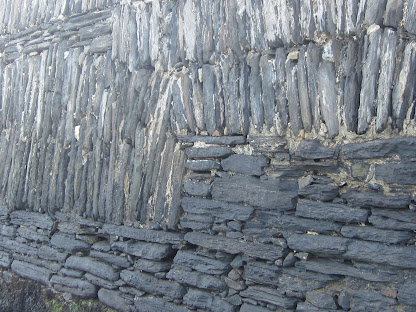 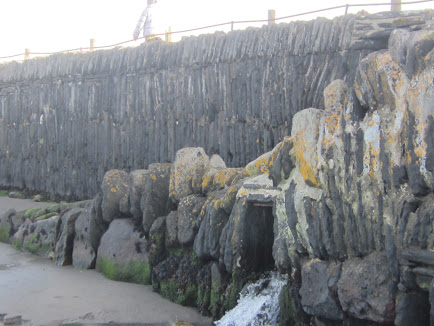 This slipway is made partly of dolerite boulders collected locally, and partly of slate slabs from the sea quarries. 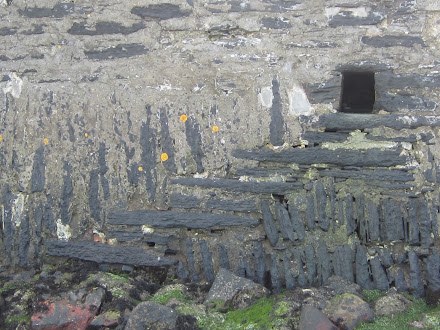 Here we can see that an old set of steps has been abandoned as the height of the wall has been increased.  Also, lines of new boulders were brought in to prevent the wall from being undercut by wave erosion.

The Parrog sea defences are rather fascinating!  They were built mostly in the early 1800s in the heyday of the port, when vessels were coming and going on almost every tide.  Some of them were actually built as trading quays, designed for vessels to tie up alongside, but they were hardly ever used as intended, because except at extreme spring tides there was never an adequate depth of water.  So vessels were mostly loaded and unloaded as they lay on the sandbanks around the river mouth, held up with props, with horses and carts carrying the goods in and out of the Parrog warehousers and to the storage area now occupied by the car park.
Originally there was a spit of land projecting from the south shore of the estuary, and the Barony of Cemais agreed to requests in the 1700s for the building of storehouses and lime kilns.  Then, in the  early 1800's private landowners and the Barony combined to provide a protective wall of slate slabs, to raise the level of the old spit to make it secure from storms and spring tides, and to add more warehouses and other buildings close to the double lime kiln (which still exists).
They also had to protect the shoreline to the west, where assorted fishermen's and seamen's cottages were very vulnerable to the waves especially when the wind was in the north.
So the defences were built, using slate or meta mudstone slabs from the sea quarries between Parrog and Cwm yr Eglwys.  It's obvious from examining the walls that there were many phases of construction and many changes of plans. There are slipways giving access down onto the sandy shore, drainage piped and gullies, buttresses, old flights of steps and a great deal more.  There is even a little dock next to the Boat Club, where vessels could be hauled up at high tide.  One day somebody will elucidate what was built, and why, and when......... 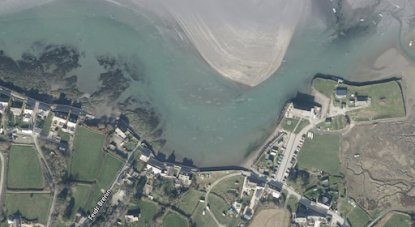 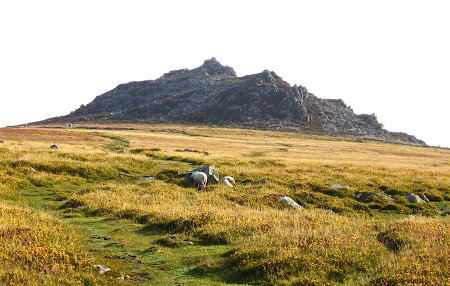 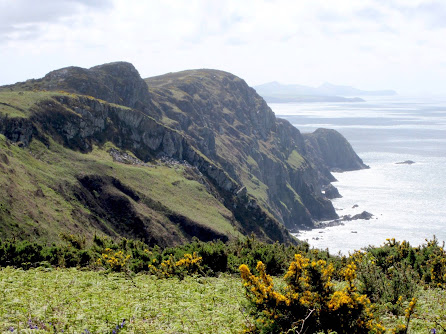 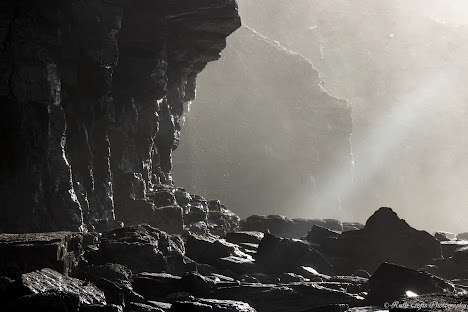 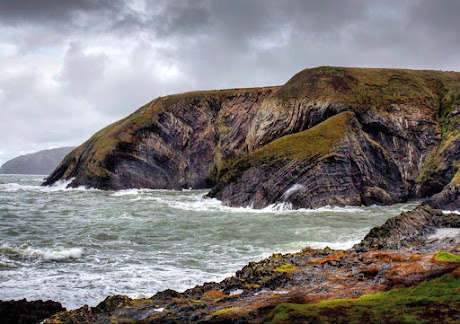 Here are a few of the gorgeous photos assembled in recent months, giving glimpses pf "Martha's territory"  - coast, woodlands and mountains.  Some are my own, others are from the PCC and NPA collection, some are from "commons" web sites, and some are published by Ruth Crofts and Deborah Tilley. 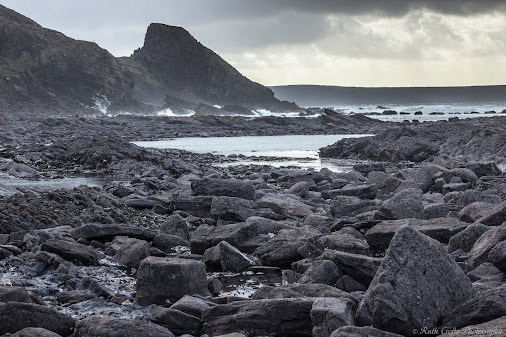 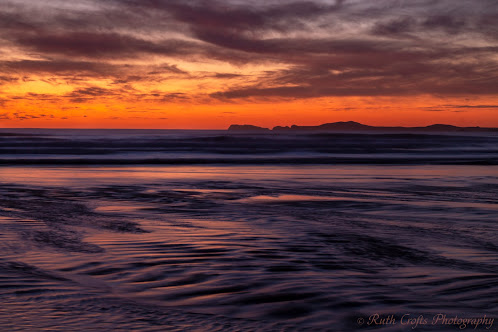 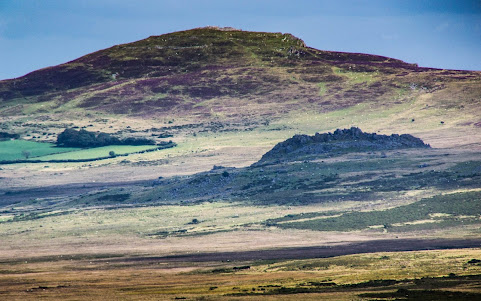 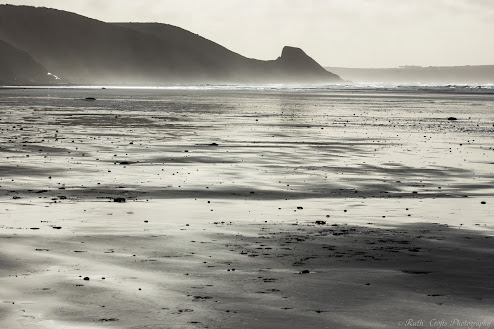 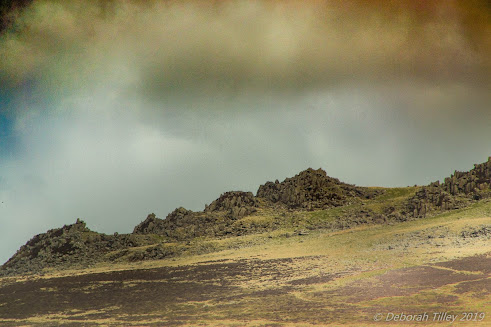 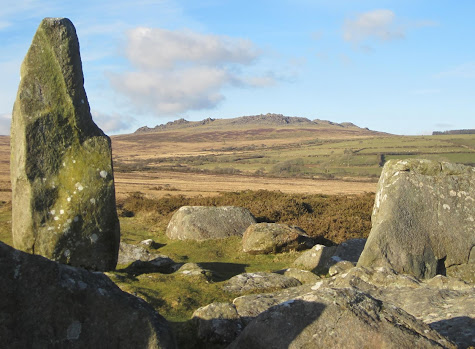 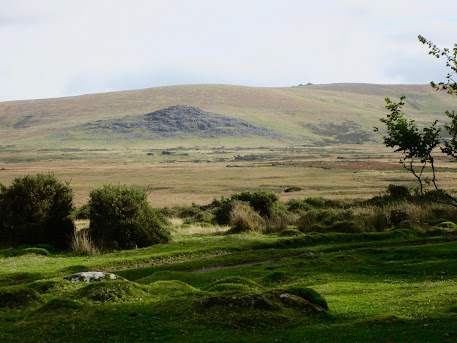 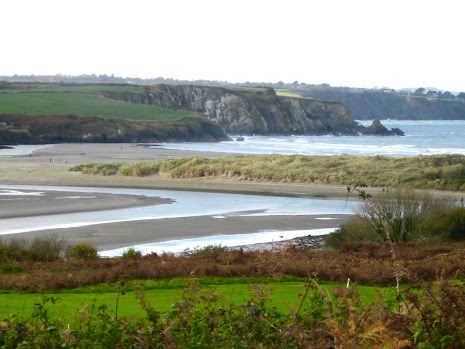 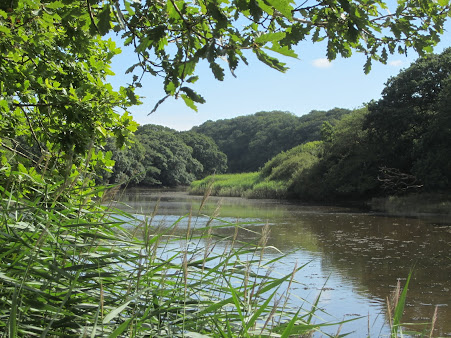 The 8 books of the saga 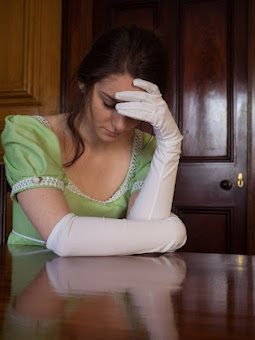 Here is the full bibliographic information about the 8 paperbacks:

The essence of place 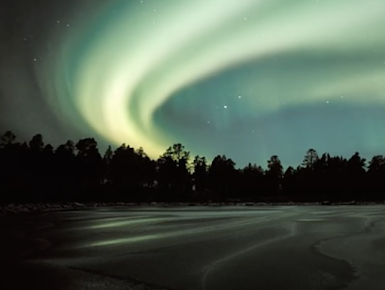 I love the manner in which the essence of place can sometimes be captured in a piece of music or an image.  This is Daniel's Jok (Yoik) sung by Jon Henrik,  who came to Sweden as an orphan from Colombia and who has made an amazing career as  a moderniser of the Sami or Lapland yoik tradition.  He won the Sweden's Got Talent competition in 2014 with this song, composed in memory of his friend Daniel.