Kindle versions -- now there are five 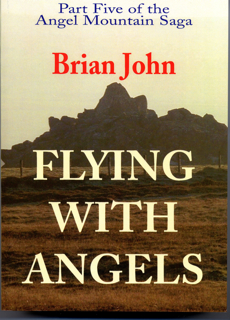 Now I have uploaded part Five as well -- Flying with Angels.  As it happens, my personal favourite (don't ask me why.......).   You can access any of these books in the Kindle version by clicking on the links below -- if you are in the UK, use the .co.uk URLs  -- and if you are in North America, go for those with .com in them.

On Angel Mountain on Kindle:

House of Angels on Kindle:

Rebecca and the Angels on Kindle:

Flying with Angels on Kindle:

Posted by BRIAN JOHN at 06:41 No comments: Links to this post

Four of the Novels are now on sale for the Kindle 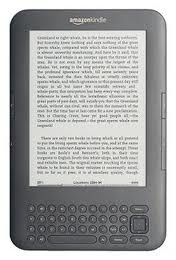 Who said that formatting novels for the Kindle is a doddle?  It is in fact a very fiddly business, involving the transfer of all chapters from Pages into Word, then the incorporation of all chapters into a single long document, then all sorts of formatting changes including the elimination of all page breaks and the substitution of new page breaks after every chapter.  Then heading styles have to be designated, a table of contents has to be made, hyperlinks have to be inserted, etc etc.  Long and laborious..... I hope it's all worthwhile!  Anyway, for those who have Kindle readers, the first four books are now on the Amazon web-site, available for purchase at ludicrously low prices!

On Angel Mountain on Kindle:


House of Angels on Kindle:


Rebecca and the Angels on Kindle:

Posted by BRIAN JOHN at 14:36 8 comments: Links to this post 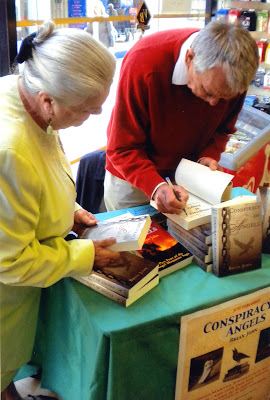 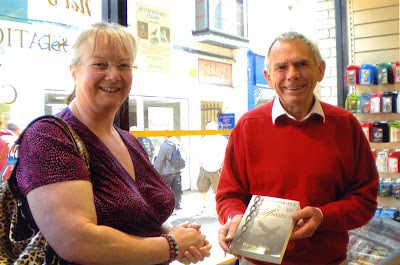 Signing sessions can be busy or they can be dead.  It all depends on how much effort the bookshop puts into press advertising, posters in the window, sandwich boards outside on the pavement, and word of mouth promotion by shop staff to customers in advance of the event.  It helps, too, if the signing event is itself in the shop window, so that people can see from the street that there is something interesting going on within......... and a cold, bright day is an advantage, too.

It helps if the author involved is reasonably well-known locally -- even if not a nationwide "big name."

Grateful thanks to Joanna Marvelly for these pics of the busy signing session and "meet the author" morning at Victoria Bookshop in Haverfordwest, about a week ago.  Shifted a lot of books, and had a very pleasant time talking to faithful followers of the Angel Mountain saga.  And the coffee was good too.
Posted by BRIAN JOHN at 13:42 No comments: Links to this post

The titles and authors of the winning children's books in the 2011 Wishing Shelf Awards have now been officially announced. (The awards, made in 2012, relate to the 2011 book submissions.)  On the Wishing Shelf web site "The Strange Affair of the Ethiopian Treasure Chest" is listed as the winner of the Category 2 award (for children aged 6-8).


Gave a talk to a good appreciative audience in Llanglydwen last evening -- on the theme of "Folklore into Fiction".  I explained my own interest in folk tales and folk traditions, and talked about the importance of social history in historical fiction.  As far as I am concerned, the Angel Mountain novels would have felt very "shallow" without some local background featuring phantom funerals, ghosts, battles in the sky etc -- and in all of the novels Martha's "special powers" are important for the development of the storyline.  The most obvious link with the supernatural is of course the wizard Joseph Harries, who features strongly throughout the saga.  Then there are the episodes in which folk traditions -- Ceffyl Pren, Mari Lwyd, divination, the harvest traditions, Christmas traditions etc all come into the stories.  They don't just provide local colour, but in some cases they are devices for moving the story on rapidly, and for the development of character.

There is much more about all of this in the companion volume "Martha Morgan's Little World."  Here is a short extract from P 175:


There are many stories from all parts of Pembrokeshire about the
sightings of phantom funerals, which were always assumed to be
warnings to the community that a death would occur in their midst
in the near future. Very often the sighting would be by only one person,
who would see a funeral procession approaching, or passing by
along a familiar route. In most of the stories the observer is initially
convinced that he or she the is observing a proper funeral, and then
the realization comes that this is indeed a phantom funeral which is
the precursor of some family tragedy. In some of these stories which
appear in Pembrokeshire folk tale collections, there is extraordinary
detail about the makeup of the funeral procession, including faces
which are recognized, the identity of the preacher and the person
driving the hearse, and even details of clothing. And of course,
when the real funeral then occurs maybe a week or a fortnight after
the observance of the phantom funeral, these little details are replicated
exactly.

In one famous story of a phantom funeral observed close to
Cilgwyn Mill, Mrs Davies, an old lady who lived at the mill, actually
observed her own funeral, and had to squeeze up against the hedge
in order to allow the procession to pass. Afterwards she described to
her daughter many quite extraordinary details of the procession and
was so upset by the experience that she took to her bed and went
downhill very rapidly. Within a few days she was in her grave. According
to her family, the details of the phantom funeral which she
had recounted were replicated exactly when the funeral procession
passed from Cilgwyn Mill on its way to Caersalem Chapel where the
burial took place.

In some cases, the details of a phantom funeral made it quite
possible to know which person in the local community was destined
to die in the coming days or weeks. Perhaps he or she was already
very ill or very old. The observer would always recognize the minister
and the family at the head of the phantom funeral procession,
and that would give sufficient notice as to the name of the doomed
person. However, there was also a convention that the observer
would not talk too widely about to what he or she had observed until
the death had actually occurred and the real funeral was over and
done with. Then the tale would be told about the phantom funeral,
and wide-eyed listeners would nod their heads in recognition that
something significant had been observed, and maybe in recognition
of the observer’s special gifts.
Posted by BRIAN JOHN at 02:00 No comments: Links to this post