The Literary Atlas of Wales 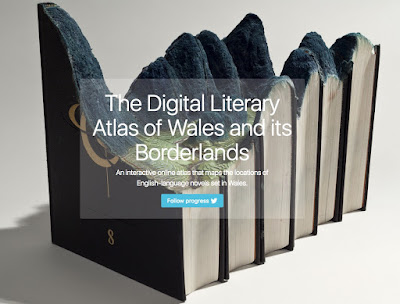 In the Angel Mountain Newsletter No 5, I have put a brief post as follows:

The Literary Atlas of Wales - worth its weight in gold?

There is nothing a geographer likes more than a good atlas.  I’m a geographer by training, so of course I love reading maps and thumbing through atlases.  I have been getting more and more intrigued by something called the "Digital Literary Atlas of Wales and the Borderlands”.  This is being run from Cardiff University by a team of three academics: Jon Anderson, S Orford and Kirsti Bohata.

So far so good.  But then you look at the budget, and you see that this is going to be the most expensive atlas in the history of the world (maybe I exaggerate, but you get my message), costing no less than half a million pounds of taxpayer’s money. Read the abstract if you dare.  Then read the “Planned Impact” statement and see if you are any the wiser.  I have been doing some checking on what has been achieved since the project started in June 2016, and I can find virtually nothing.  I’m sad to have to say it, but we live in hard times, and how on earth did this project get funded?  What is it going to contribute to Welsh literature, or to the common good?  Does anybody actually WANT this atlas?  Hmmmm……..

A bit more detail.  On the work schedule, the project which started a year ago committed to producing a web site by summer 2017.  There is indeed a web site, here:

but it's one of the thinnest web sites I have ever seen, with virtually nothing on it which is of any use.  I have found out in correspondence that the Atlas team has decided upon 12 English-language Welsh novels which have been sent out to readers groups all over Wales.  The novels selected include a few that are well-known, but there is no balanced geographical spread, and most of the items on the list are the sorts of things frequently discussed in university seminars rather than on street corners.  There is nothing from Pembrokeshire, which is maybe considered to be a cultural desert!  Here is the list:

There is a lot of activity on the project's twitter page, and from that it appears that the team has sent these books out to 18 reading groups or focus groups who will then discuss them in the presence of the project organizers and who will physically visit the places described in the books. There will be 12 "literary tours" as well, some of which will be organized by Literature Wales.  These will be led by the book authors, or if they are dead, by "experts."  All very jolly.  Costs will be carried by the Atlas, and it looks as if videos are planned, with some audiovisual content being attached to the "Land of Legends" web site created with grant aid by Literature Wales. (This element has recently been supported by the Welsh Government's TPIF fund.)

There is an art commissioning component as well, as described here:
http://literaryatlas.wales/commission.html
Artists will be paid for their work, but there is no mention of the size of the budget.

This all sounds like a lot of fun for the academics involved, and for the reading groups who will take part in seminars, discussions and literary tours to places they might not otherwise have visited, but we do need to ask serious questions about value for money.  I think I might be happy with £50,000 being spent on something like this, but let's remind ourselves that the price tag is half a million pounds of taxpayers' money.  Even though I am a geographer with a degree of understanding of what a "literary atlas" is all about, as a taxpayer I feel very uneasy indeed.............