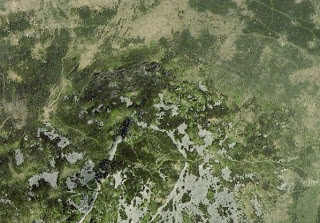 Now here is an interesting thought.  I have always gone with the belief that CARNINGLI is a very ancient name which means "the rocky mountain of the angels" or some such thing.  "Carn" is well known as a component of thousands of place names in Wales, and "ingli" is widely assumed to be a corruption of the old Welsh word for "angels."  And the assumption is that the name comes from the tradition that St Brynach used to climb up to the summit "in order to commune with the angels."  Some believe that the sanctity of the mountain goes back even further, maybe to Iron Age times.

So far so good.  But I noticed the other day that on the Coflein records, Garn Fawr (the hillfort site on the Pen Caer peninsula, close to Pwllderi) also used to be known as Caer Fawr.   Not "the big rocky crag or hill" but "the big fort".

So might Carningli be a corruption of Caer Ingli?  There is a magnificent Iron Age hillfort or defended settlement on the summit, as we all know.  You can see some of the defensive banks on the satellite image above.  Various authorities in the past have speculated that "Ingli" might be a personal name rather than a corruption of the word for angels, and might it be that somebody called Ingli was the chieftain who built the hillfort?  Folk memory just about goes back to the Iron Age, and there is a tradition that in the Age of the Saints Brynach and David had difficult encounters with assorted Irish chieftains and roving bands of warriors who came across the sea from the west.  They were seen as pirates, but they might just as well have been tribal groups who were intent on settling in Pembrokeshire.  History is rather hazy on all of this.  But one Irish chieftain is supposed to have set up base at the defended site known as Garn Ffoi, not far from Newport and not very far from the summit of Carn Ingli.  Might there have been a tribal group in occupation of Carningli hillfort as well, in the period following the departure of the Romans?  There are signs that the defensive walls have been "slighted" or deliberately destroyed -- archaeologists have wondered whether this represents the culmination of a brutal battle for the summit and a defeat for the defending settlers............ who were slaughtered or evicted, never to return to a place reduced to ruins.

So we have another theory -- namely that Carningli might originally have been named "Caer Ingli" -- the fort or fortified settlement built by and ruled over by a chieftain named Ingli.  Who was he, and when was this happening?  Maybe time will tell.