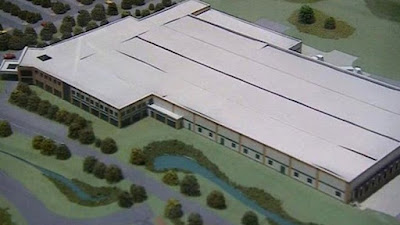 The Welsh Tories are continuing their intense scrutiny of the media industries in Wales, and the latest piece of political opportunism involves the big Pinewood Studio complex in Wentloog near Cardiff.  Here is the BBC coverage:

There is nothing much else going on, and so the Tories are doing what they can to grab a few headlines while the rest of the world is on holiday.  They imply that it's outrageous that Pinewood has had a "rent-free holiday" of two years since moving on on these studios, which are actually owned by the Welsh Government -- in other words, the taxpayer.   The culture minister Ken Skates is caught between a rock and a hard place.  The Government has to invest in the creative industries if it wants film and TV companies to work in Wales -- and that means acquiring capital assets and giving rent holidays. If it does not do what it can to attract big names that might otherwise go to Scotland or Northern Ireland, it will come under attack for a lack of foresight.  But it has to be careful.  Big outfits like Pinewood are notoriously footloose, and will go where the money is.  And there is no guarantee that they will stay either.  History is full of business enterprises that move into "advance factories" or business park sites all over Wales, mop up whatever funding is available, and then go bankrupt or do a runner.  Taxpayer's money down the drain.  It has always happened, and probably always will, whatever the colour of the Welsh Government.  The best that we can hope for is due diligence on the part of the economic development / business team within the Government, and a reasonable level of scrutiny from the Opposition.  So it's no bad thing that the Tories are keeping an eye on things.....

What's more interesting is the question of what Pinewood does with the fantastic studio facility that is at its disposal.  There appear to be less than 40 permanent jobs on the site, although of course when a production is in full swing there will be people everywhere!  As far as I can gather, Pinewood (the tenant)  is still not required to prioritise productions that tell the story of Wales, for the people of Wales and for the world.  There is some vague advice on that, but the studio bosses can ignore it if they so wish.  So without decisive action from the Welsh Government, my concern is that the studios will simply be used for telling other people's stories for a global audience, with no reference whatsoever to Wales, except in small print in the rolling credits.

I also gather on the grapevine that small Welsh production companies are not happy to work with Pinewood because of the very prescriptive manner in which it operates, pulling in-house many of the components of a production that are traditionally out-sourced in Wales.  Producers hate losing control of their projects -- and somehow minister Ken Skates has to find a way of getting more Welsh projects into the Pinewood Studios and getting Pinewood to operate in a more sensitive fashion.
Posted by BRIAN JOHN at 01:44