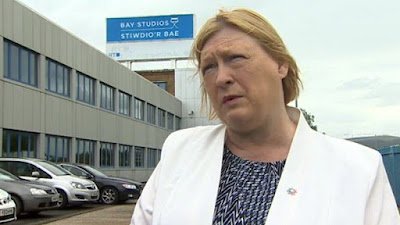 There is a lot of discussion just now about a £4 million loan given by the Welsh Government to Bad Wolf, set up by Julie Gardner and Jane Tranter to bring seriously big TV and film projects to Wales.  It looks as if the Welsh Tories have got hold of the company accounts, and are making a big issue of the fact that Bad Wolf made a loss in the last tax year of £2.8 million while the three directors paid themselves almost £2 million over 18 months in salaries and other remunerations including a £300,000 "relocation package" for Julie Gardner.  It's difficult to know whether this is a storm in a teacup or not -- these big schemes involve highly complex financial / investment transactions, and of course the Tories are making political capital out of the story, blaming the Labour Government for playing fast and loose with public funds.  Is the £4 million paid out by the Welsh Government seriously at risk?  Only time will tell, but sure as eggs is eggs, this story does not do much good for the reputation of the creative industries in Wales.  It doesn't do much good for Bad Wolf either.