All about Owain Laugharne 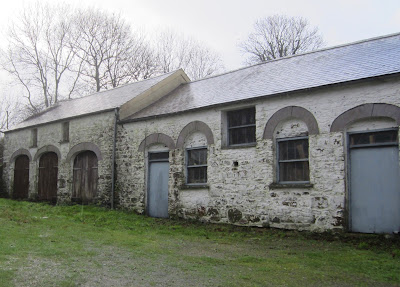 Some of the outbuildings at Pontfaen, the fictional family home of the Laugharne family

Owain Laugharne, the second great love of Martha’s life, is more central to the story than husband David who dies in February 1805. He is a heroic and at the same time a tragic figure. Much of House of Angels is concerned with the tentative and tender progress of the love affair between Owain and Martha, and the story of their relationship is also a key part of Dark Angel. At the end of that story it appears inevitable that the two of them will be married; but of course that never happens and although Owain survives until 1825 he remains determined to the last that he will not to marry Martha and that he will not thereby remove the inheritance of the Plas Ingli estate from her children and grandchildren. Ironically, they fail to inherit it anyway, since the estate is lost in 1845.

Owain goes through life with a rather warped sense of duty, and this is of course a great source of irritation to Martha. But she loves him with a fierce passion, and following his return from foreign parts she defies all of the conventions of good breeding by making it obvious to friends and enemies alike that the two of them have an unmarried intimate relationship. That causes considerable grief to the younger members of the Morgan family, who are more concerned about appearance and reputation than is Martha herself. (That is of course not the only occasion on which Martha’s appetite for sex gets her into trouble. Next time round, apart from a dalliance with solicitor Hugh Williams which she gets away with, the lucky recipient of her favours is Jones Minor Prophet.)

So what lies behind Martha’s great love for Owain? Well, he is a very interesting character. He is physically very attractive, as Martha admits at a very early stage in their relationship. She is deeply affected by the sight of Owain splashing about in the pool at Pandy, without a stitch of clothing on, and singing like an innocent child who has not a care in the world. That quality of innocence or naivete is perhaps the crucial feature of Owain’s personality. He is cultured and sensitive, and has an extraordinary sense of decorum. He holds back when others might join in, on the basis that he is unsure about what might be deemed to be unacceptable behaviour. Even his sister Mary Jane, one of Martha’s greatest friends, jokes about his exaggerated sense of duty and stiff demeanour. That irritates Martha as well, for in spite of her love for him she admits in the pages of her diary more than once that she would like to see more spontaneity and courage when he is with her on the social stage.
The crucial episode which demonstrates Owain’s obsession with decorum and reputation is that in which he writes a letter to Martha before the party at Plas Glynymel. Martha misunderstands his behaviour, which is in reality entirely honourable, and as a consequence ends up drunk and in bed with the dastardly John Fenton. She is angry with Owain for what she sees as timidity and an obsession with appearances, and lives to regret her hasty misjudgment of the situation.

Since Owain is a poet, a musician, and a man given to sending flowers to his beloved, one might expect him to be blissfully unaware of the subtleties of convention and etiquette. After all, many great artists are so self-obsessed that they fail to see the consequences of their actions as they affect other people. So it would have been easy to build into his character wild eccentricities and outrageous deeds. But because he was a sensitive and quiet child, he turns out to be a very naive adult, and this is what underlies his timidity and dithering during the course of his love affair with Martha. And don’t let’s forget that Martha is a desirable young widow with a very young family, and that in the 19th century there are very strict conventions concerning periods of mourning and appropriate behaviour following the death of a husband. Although Martha may not always realize it, many of Owain’s actions are motivated by his desire not to harm the children and always to treat them with affection and respect.

Courage is not something which Owain lacks. During the course of his life he shows an ability to survive the most appalling cruelty. In House of Angels he is terribly mutilated by the villains who believe that he knows the location of the Plas Ingli treasure. He survives that ordeal, although Martha suspects that it has harmed his mind as well as his body. Then, when he disappears for fifteen years out of Martha’s life, he suffers again, tortured as a spy in the complicated wars that afflicted the European mainland in the early part of the 19th century. We never really discover what terrors Owain had to endure, but we are quite certain that the damage was immense. Although he returns from foreign parts somewhat belatedly in 1822 on the night before Martha is due to marry Ceredig, and although she gives up that poor fellow for her old love, Owain has lost most of his youthful vitality and he is never the same again. For a year or two there is a brief passionate interlude in which Martha and Owain offend the sensibilities of the more respectable members of the community. She does not care, or at least professes not to care, and maybe Owain is too ill to care. The story of his sad decline between 1822 and 1825 is not told in detail, but of course it affected Martha very deeply.
But in the last few years of his life, Owen shows that he is strong enough, in spite of his physical weakness, to refuse to marry Martha. And it takes a very strong individual to stand up against the wishes of the Mistress of Plas Ingli!

In case anybody wondered, the story of Owain’s long absence and eventual return probably came into my head because I was already familiar with an old Welsh folk tale which relates a similar occurrence in the Teifi Valley above Lampeter. On checking, I find that there are very similar stories in folk tale collections from other countries as well - so there is nothing particularly Welsh about this part of the story. What is unique, I hope, is the use of strong characters in the retelling of an essentially simple tale, and the emotional involvement of the reader in Martha’s dilemma and in the tragic consequences of Owain’s sudden reappearance.

Finally there is one question which I am often asked about Owain’s behaviour. Why, people ask, does he remain abroad for fifteen years if he is genuinely in love with Martha? Why does he not move mountains, as a passionate and heroic lover, to return and claim her as his bride? The answers to those questions are provided to some extent in the pages of the Saga, but in his long explanation of his absence in the concluding pages of Dark Angel he describes how he picked up news (faulty news, as it happened) of Martha’s marriage to another suitor. He knows that if he was to return to find her a married woman, that passion between them would be re-ignited, with the result that several lives would be destroyed. Like many tragic figures, Owain is also a martyr, and I think it is entirely in character for him to remain on the mainland of Europe, carrying his love for Martha like a great cross upon his back in the confident belief that in his suffering he is contributing to her happiness and to the well-being of her family.
Posted by BRIAN JOHN at 13:16