Visit Wales and Year of the Sea 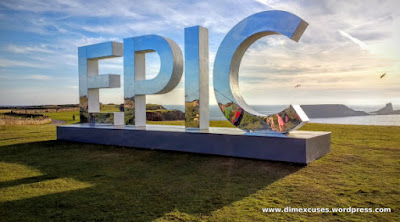 Press release from the Welsh Government celebrating the success of their recent new marketing strategy, with a big rebranding exercise, a new typeface (which is rather nice, I think) and a lot of high-pressure salesmanship.  Well, that's what marketing is about, in a highly competitive environment...... 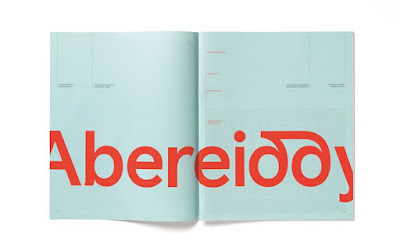 All the info is here:

So it's good to know that visitor numbers are up and that the extra spend on these high profile campaigns is paying dividends.  Thus far there have been two "themed years" -- Year of Adventure and Year of Legends.  Next year will be Year of the Sea and then the one after that will be Year of Discovery.

The first year had one imaginative and much-reported stunt which went on through the summer -- the location of some giant letters spelling out "EPIC" in assorted key locations which were not announced in advance.

Now then -- in a spirit of helpfulness, here is an idea for Visit Wales for the Year of the Sea.  They could have another set of giant letters which could be moved all over the place at dead of night, springing up here, there and everywhere, accompanied by the cheers of locals and visitors alike.......  it would be cheaper then the campaign using the word "EPIC" (with four letters) because the word to be used is:

THE TEXT OF THE PRESS RELEASE:

A celebration of our Epic Shores – Year of the Sea 2018 gets underway
Today, Tourism Minister, Lord Elis-Thomas will launch Wales’ third themed year – Year of the Sea 2018.
Monday 11 December 2017
Next year will be the opportunity for Wales to make its mark as the UK’s top 21st century coastal destination.
• building on Wales’ strengths as a leading 21st Century coastal destination
• Olympian Hannah Mills announced as Ambassador for Year of the Sea
Following the success of Year of Adventure 2016 and Year of Legends 2017, Year of the Sea is a continuation of Visit Wales’ work to reinforce positive perceptions and challenge any outdated perceptions of Wales by promoting our world-class products, activities, events and experiences.
The themed years were developed to build on stand-out strengths of Wales’ tourism offer and to capitalise on major events opportunities happening that year.
The Tourism Minister, said:
“Following a focus on adventure and legends, we now have an opportunity to celebrate Wales’ coastline and build on Wales’ strengths as a coastal destination.   As we launch this new initiative it’s fantastic news that the Rough Guides have named Wales as one of the top 5 places in the world to visit – testimony that we’re making a name for ourselves in this global market place.
“The themed year gives us a chance to celebrate our unique 870-mile Wales Coast Path, our 230 beaches and 50 islands and the fact that we have more Blue Flag beaches per mile than anywhere else in Britain.
“Year of the Sea will be about more than our coastline. We’ll be using the year as an opportunity to focus on Wales’ shores, and this will include not only our seas, but everything from our lakes, to our rivers, and journeys to the sea and will be a celebration of our coastal communities and culture.  We’ll be using the Wales Way, an ambitious new family of three national scenic touring routes that cross the country’s most epic landscapes as a way of showcasing Wales’ fascinating history, coastlines and attractions.”
“This year, leading up to 2018 has been a time for planning and developing and establishing new partnerships. Sustainability and Marine Environment are high on the agenda as is safety on the sea and ensuring that everyone enjoys the beaches, but in a responsible manner.”
The Welsh Government has recently launched a consultation on the Welsh National Marine Plan with a commitment to secure a joined up and sustainable approach to the planning and management of our coast and sea and to help achieve our vision of clean, healthy, safe, productive and biologically diverse seas.
The guiding objectives in developing the Welsh National Marine Plan are we will achieve more by working together with stakeholders to preserve our coastal communities, awe inspiring coast, seas and wildlife whilst developing our maritime economy.
Hannah Mills, MBE, double Olympic medalist and Cardiff-born sailor will today be announced as Ambassador for Year of the Sea 2018, Hannah said:
“I am so excited to be involved in Year of the Sea. Growing up in Cardiff and exploring the coasts and seas around Wales from Anglesey to Mumbles, the Welsh coastline has had a huge impact on shaping my earlier career.  Those memories and beautiful experiences sailing in such a stunning place remain very firmly in my mind.  My family are still based in Cardiff, and for me it will always be home.  When I won gold in Rio, the warmth and support I got from back home was phenomenal.”
The themed years also make a difference to Wales’ economy. The first of Wales’ themed years in 2016 generated an additional £370 million for the Welsh economy – an 18% increase on 2015.  This shows visitors were definitely influenced by Visit Wales marketing before taking a trip to Wales.
During 2017 - the Year of Legends - figures from the Tourism Barometer survey are looking positive with 42% of respondents reporting more visitors than last year.  There were also record breaking visitor numbers to Cadw and National Museum Wales sites over the Summer.
The Welsh Government is investing significantly in projects which will help promote Year of the Sea in Wales.  More than £2 million had been shared by for a total of 38 projects across Wales under the Tourism Product Innovation Fund and Regional Tourism Engagement Fund which enables the private and public sectors to develop innovative projects and support the themed years.
To coincide with the Launch of the Year of the Sea, St Davids based TYF Adventure will launch a new product for 2018 –SUPKids programme which is designed to teach children (5-12 years old) Stand Up Paddle boarding, water safety & environmental education and was funded through Visit Wales.
Significant investment will also be made in Coastal locations through Welsh Government EU funded Tourism Attractor Destination scheme.
Colwyn Bay Waterfront project will open in 2018 an investment of £3.9million; work on the £5.5 million Porthcawl Maritime Centre is also underway,  and £6.6million investment for  a new terminus building for the Welsh Highland Railway in Caernarfon  and extension to cultural facilities at Galeri as part of the wider programme to regenerate Caernarfon’s Waterfront.
The Welsh Government’s Tourism Investment Support Scheme continues to drive a higher quality offer, recently supporting a number of accommodation projects on Wales’ coast as well as investing in improving coastal food offer, examples include Dylan’s in north Wales, Bryn Williams in Colwyn Bay; Coast in Saundersfoot; The Griffin Inn, Dale; Twr y Felin St Davids.
The Volvo Ocean Race also takes place next year - the world’s toughest and most prestigious sailing event which will come to Cardiff in May and June 2018.  Andrew Pindar; Volvo Ocean Race Ambassador will attend the launch to give a flavour of what Cardiff can expect next year.