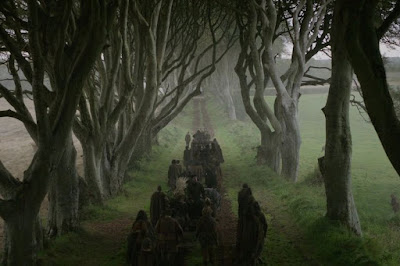 I have been doing some research.  Below, I cite a very big economic impact study and then some recent case studies.  There is no doubt at all that a high-end "Angel Mountain" drama series will have a major impact on the local economy, if managed properly.......

Some points:
Up to 4% of all inward visits to tourism "locations" are stimulated by film, TV or literature.
Tourism spending in Scotland associated with the films Braveheart and Rob Roy is around 8 times the UK box office takings for the film.
For each pound of High-End Television Tax Relief (HETR) granted,  £8.31 of added value was created through direct and multiplier effects.

1.  Game of Thrones (Netflix)
Quote:  In the last five years, "Game of Thrones" alone has brought in approximately £110 million (~$170 million) to the Northern Ireland economy.The HBO show is responsible for creating around 900 full-time jobs and 5,700 part-time jobs in the area, which includes catering, hospitality, and other accommodation services in addition to the film crews, production assistants, and other local artisans that work directly on the show.  That's not a bad return on investment, considering the £12.45 million (~$19 million) spent in subsidies and incentives to bring the show there in the first place. (The producers had originally planned to film in Scotland, where they shot the pilot episode.)
http://www.upworthy.com/game-of-thrones-might-be-fantasy-but-its-economic-impact-on-northern-ireland-is-very-very-real

2.  Poldark (BBC)
Poldark effect: visitor numbers in Cornwall went up by 155% as a direct result of Poldark series on TV.
Visit Cornwall website had 50% more visits because of the series.
26% of all visits to Cornwall in 2015 were triggered by Poldark.
St Aubyn Estates Holidays( Porthgwarra Cove) says that in 2015 it estimated having welcomed almost 100 per cent more visitors at Easter than the same time in 2014.
https://www.thesun.co.uk/news/1197461/the-poldark-effect-devon-and-cornwall-see-visitor-boom-of-155-per-cent-after-hit-bbc-series/
The “Poldark”effect is cited as helping to generate economic gains worth £17.5 million per year in Bristol alone, from film production spend; and in Cornwall there are reports of a doubling of holiday bookings and visitor spend as a direct consequence of the local filming of the drama.  Similar effects are seen in all areas popularised through TV costume drama series.
http://www.plymouthherald.co.uk/poldark-effect-8216-brings-tourists-flocking-to-cornwall-8217/story-29707707-detail/story.html

3. Hinterland (S4C / BBC Wales)
Research for Ceredigion CC indicated that the first series of Hinterland had generated additional economic activity worth just over £1 million in the county.  Much greater benefits will have accrued since then, and filming will soon start for a fourth series.
http://www.discoverceredigion.co.uk/English/more/culture/filmtv/Pages/Hinterland.aspx
https://www.theguardian.com/travel/2013/sep/08/travel-ceredigion-wales-hinterland

Note:  High-end drama is defined as drama costing in excess of £1 million per episode, and qualifying for a 25% tax break from the UK tax authorities.