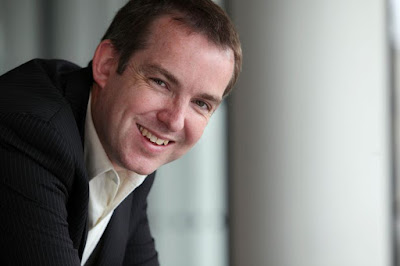 A big new announcement from BBC Wales today, taking everybody by surprise -- the announcement was expected in March.  Rhodri Talfan Davies spoke to the media and there was a considerable piece on the BBC web site:

So the BBC has at last responded to the demands for better and more extensive Welsh content in English-language broadcasting -- but instead of the £30 million asked for by the IWA and the Assembly's Culture Committee, the extra amount allocated from BBC's London HQ is only £8.5 million.  Rhodri Talfan Davies says this will mean a doubling of the spend on drama and documentaries in Wales -- but these days you cannot do much with £8.5 million, unless, that is, BBC Wales makes such brilliant programmes that they can be widely sold and can turn a profit.

We shall see.  Apparently there will be two brand new Welsh dramas commissioned by BBC Wales -- and a new Head of Drama as well.  There will be a further announcement within the next few days......

There is another welcome development.  In response to the pressure from the Culture Committee the BBC now says it will introduce a number of steps to improve the "portrayal" of Wales on its network channels.  These include the appointment of a television drama commissioner for Wales; the introduction of a BBC Writersroom team; the introduction of a £2m portrayal fund; on-screen portrayal objectives across production teams; a commitment to produce at least 5% of network programming from Wales; and a commitment to work in partnership with the Welsh Government’s proposed Creative Wales body.