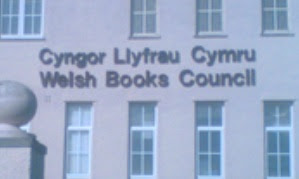 The annual report of the Welsh Books Council for 2016-17 has just been published. It's well worth reading, since it contains rather enlightening financial information. It's worth recalling that the WBC is a "top tier" funded organization which gets its grant aid directly from the Welsh Government (in contrast, Literature Wales is a second-tier organization getting its cash through Arts Council Wales.

The thing that strikes one, on reading through the report, is the extraordinary degree of overlap between the functions of WBC and LW -- the former provides author support payments, manuscript assessment and editing, advances for authors, marketing support, publishing and design grants, and even commissioning funds for new titles.  There are even grants for publishers for the appointment of extra staff.  The latter provides bursaries and mentoring support for writers and also helps with marketing and promotions.  The situation is very messy, as the "Medwin Hughes Panel" reported to the Culture Minister Ken Skates last year.

But one thing is clear -- neither within WBC or within LW is there any realistic attempt to determine whether the taxpayer gets value for money in the large sums of money expended in grant aid.  Record keeping of book sales appears rudimentary at best;  that's surprising, since book sales figures are the only realistic measure we have (or don't have!) to show us whether titles published are actually of any interest to readers.

So for the millions of pounds spent in recent years on grants to writers and publishers in Wales, what added value has accrued to the taxpayer?  Is Wales actually better off as a result of all the writers supported and all of the titles published?  Or are we all being conned that Wales has a wonderfully vibrant literary scene, when all it has is a gravy train which keeps a small number of people happy when they might well have been better off had they been exposed to the commercial realities of the market place?

Of course, the generous (some might say "bizarre") level of funding poured into the "literary industry" in Wales  is justified, quite regularly, on the following grounds:

Publishing Grants (English)
In a market that is dominated by large Anglo-American companies, support for English-language publications is essential in order to ensure a range of books and magazines that reflect the distinctive culture of Wales. This funding provides readers in Wales with materials that are relevant to them and encourages an outward-looking sector which presents the culture of Wales on an international level. In 2016/17 grants funded 21 publishers or imprints across Wales, supporting 103 books and 8 magazines in English.
Extract from p 23 of the Report.  Ah, those nasty Anglo-American corporations!  Then the Report continues:

Creating opportunities for creativity
The range of grant schemes helps to ensure variety for readers in Wales and beyond. Our Individual Literary Book Grants fund books of strong literary and cultural value that could not be published
without such support and, in many cases, enable work by emerging writers to be published. In 2016/17 recipients of grants under this scheme included Cinnamon Press and the University of Wales Press.

Let's look at some of the figures which we can extract from the tables in the Report:

232 Welsh-language titles were "supported" at a cost of £449,063  with assumed average sales of 831 copies (those are actually the sales of 2014-15 titles after two years of market exposure......).  The average grant per title was £1,935.  This probably reflects the large proportion of "small" children's books in Welsh, and small print runs.

74 English-language titles were published with grant aid totalling £301,248.  25 author advances (totalling £42,000) were paid, and 21 marketing grants were paid.  48 titles were published by the 5 "revenue publishers" at a cost of £248,798 -- ie £5,183 per title.  Individual grants to smaller publishers totalled £52,450 for 26 titles, working out as £2,017 per title.  The average grant across all 74 titles was £4,070 per title.  The very high average grant per title to the larger publishers probably reflects larger print runs and more ambitious publishing projects including glossy hardback volumes.

Overall, the publishing grant aid programme from the WBC has expended over £750,000 during the last tax year on the support of 306 titles -- representing an average grant of £2,450 per title.  The grants are more than adequate to pay for the full production costs of books designed for the Welsh market, which will generally have print runs of perhaps 1,000 copies.  This means that Welsh publishing is effectively a risk-free enterprise, for those publishers who are supported within the system.

Back to value for money.  Apart from the "average sales figure" for Welsh-language books published in 2014-15 (831 copies) there is no indication anywhere in this report of how successful any of the published books has been.  Some might say that sales figures are "commercially sensitive information" -- but that information should most definitely not be treated as confidential where the full publishing cost of a book has come from the public purse.  So does anybody at WBC collect and collate book sales figures?   If not, why not?  Is any responsibility placed upon publishers to report on sales (by which I mean REAL sales, excluding free copies, review copies and returns)  for those titles that are grant aided?  If not, why not?  What is the application procedure for publication grants? Who decides which authors will be commissioned to write things, and which ones will receive publishing advances from WBC?   Are those monies returnable if and when books become successful, or if they fail to get into print?

Is anybody asking some fundamental questions about the publishing industry in Wales, which likes to portray itself as "vibrant" and "productive"?  Success seems to be measured simply by counting the number of books produced, with no account taken of either market demand or actual sales figures.  Publishing is a commercial business, and if publishers cannot be bothered to work out what demand there may be for the titles they publish, they should be required to carry the full commercial risk themselves, instead of publishing (at the taxpayer's expense) a stream of titles which nobody wants and hardly anybody reads.

On looking at the WBC guidelines for publishing grant applicants, I found the following:

MONITORING AND EVALUATION OF WORK FUNDED
The Welsh Books Council will ask publishers to provide regular updates of sales figures for titles supported under this scheme and may also require copies of reviews to help monitor quality. It is condition of grant that these figures should be supplied.

The guidance document is quite reassuring in that it does flag up the care that goes into the applications process and the assessment of applications (including the use of "independent" assessors -- but if sales figures are required as a condition of grant aid, why on earth are they not properly collated and published?  Could it be that the figures are so embarrassingly low that public knowledge of them is deemed "inappropriate" or "potentially damaging"?