The Battle in the Sky 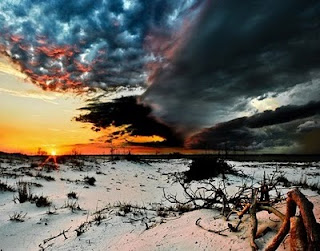 I'm often asked about the strange battles in the sky which Martha sees -- on several occasions during the course of her life -- and which she always takes as premonitions of terrible things to come. By way of explanation, here is an extract from Ch 9 of "Martha Morgan's Little World":


The Battle in the Sky

This is something which is not unique to Wales. There are stories of battles being seen in the sky from all over the Western world, and it appears that those who see them are always very frightened by them. Their descriptions of what they have seen and heard are often very detailed, with specific mentions of the sounds of weapons flashing, men screaming, horses neighing and falling to the ground, and clouds of arrows flying through the air. There are not very many stories of battles in the sky actually being observed in Wales, but in my researches I have come across three stories from North Pembrokeshire. All three of them come from the area around Mynydd Morfil and Puncheston. Interestingly enough, in each of the stories the battle was observed by more than one person, and on one occasion the battle was seen above Morfil by two gentlemen who were very frightened by it and who sought refuge in a nearby house. They were given shelter as the battle continued in the sky, observed by the two refugees and by the householder. A feature of these phantom battles is that they seem to be quite prolonged, maybe continuing for more than two hours, whereas most supernatural phenomena appear to come and go within a few minutes or even seconds.
It is difficult to tell from the literature whether phantom battles are spiritual recordings of something which has happened in the past, or whether they are omens or signs of some tragedy to come. When Martha encounters her battles in the sky in the stories, she is in no doubt at all that they are supernatural indications of some tragedy which will soon affect her or those whom she loves -- and of course she is right.
There is much speculation about the occurrence of the battle in the sky in the heavens above Mynydd Morfil, but historians now seem to agree that the location is precisely right for a famous and bloody battle which occurred in the year 1087 when two Welsh armies met. The conflict was really just part of the internal power struggle within Wales following the Norman invasion. The Normans were already moving into Wales, and if the Welsh princes had then united instead of fighting each other, the history of the Norman invasion (and of Wales) might have been quite different. One army, which included many mercenaries from Ireland, landed at Porthclais near St David’s and marched eastwards for one day. The other army, assembled by an alliance of Welsh princes, was marching westwards from Cardigan. Thousands of soldiers fell in the battle, which had no obvious victor -- so it was ultimately quite futile. It was called the Battle of Mynydd Carn, but no historian has ever found its location, and no traces of weapons or burials have been found. Maybe one day archaeological evidence will be discovered to confirm that the battle of Mynydd Carn did indeed take place on Mynydd Morfil or in one of the adjacent valleys.
at August 31, 2010

The view from the woods 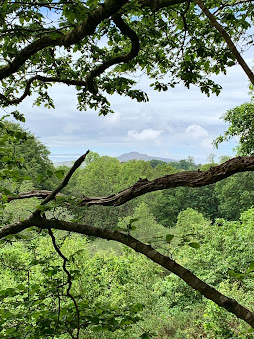