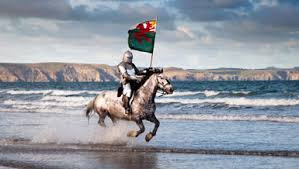 There was an interesting meeting today in St David's, where a number of us mulled over the need for a coherent welsh narrative, and discussed how best to use it as a means of increasing Welsh self- awareness, self-esteem and pride.  We agreed that not enough people have a clear concept of what our story is in Wales, or of how it differs from the stories of Scotland and Ireland.  In those two countries there have been deep national traumas associated with the Great Famine and the Plantations and Clearances -- and also mass exoduses of people to the New World. In Wales, there have been traumatic episodes, but never on such a scale that millions have died -- and overall the story is not one of people leaving, but of people flooding in to fuel the Industrial Revolution that took place particularly in the nineteenth century.  So the population was not decimated, but grew as people from all over the UK and further afield arrived and settled in, resulting in great ethnic diversity and the establishment of a very large population of settlers who did not speak Welsh.  There is to this day a tension between "Welsh Wales" and "English Wales"........ but that does not have to be looked on in a negative light. Indeed, it may be counted as an asset, as many observers have agreed.

We agreed at our meeting that Michael Sheen's narrative of Wales as a victim, exploited and suppressed by a powerful and predatory neighbour, was not entirely accurate, and is a difficult to use in the context of tourism marketing!   Far too negative.  Something much more nuanced is appropriate, flagging up positives.  I remain convinced that the "potted narrative" needs to be something like this:

"Wales is a small country on the Celtic fringe of Europe with magnificent landscapes and rich natural resources. It is too close to England to have remained truly independent, and not far enough away for bloody rebellions ever to have taken hold. Throughout its history it has fought to resist the depredations of powerful neighbours; and against all the odds it has retained its language, its culture and its pride whilst encouraging toleration and liberal values and adapting to dramatic change. It has learned how to be subversive and seductive, and how to be spiritual and mischievous at the same time. In its history it has not suffered the same deep traumas as Scotland and Ireland. Its people are romantics, prone to wild swings of emotion; both melancholia and euphoria feature in the national psyche. Welsh people have a powerful "sense of place" and an abiding fondness for family histories, legends, ceremonial and ancient traditions. Eccentricity is embraced, while great value is placed upon learning. There is a tendency towards radical protest and an ever-present desire for social reform. Ultimately, Wales wants the respect of others -- and to be left in peace to enjoy and endure its own strange obsessions.”
Posted by BRIAN JOHN at 13:27