The exploitation of Wales by the broadcasters 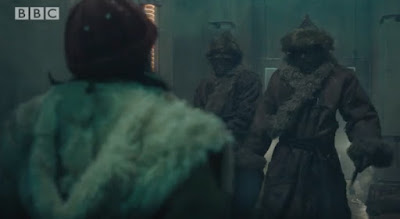 His Dark Materials -- made in Wales, but not a lot of Welshness contained......

I have posted a new press release here:

This deals with the exploitation of Wales by the broadcasters and by the film and TV production companies.  It follows on from the articles written by Sam Parry,  Gareth Leaman, James Williams and others about the manner in which Wales has become -- almost by default -- a very nice place to make programmes featuring other people's stories.

It wasn't meant to be this way -- the Welsh Government really does want to see "the Welsh story" on the small screen and the silver screen, but its funding guidelines are so loosely written that they can easily be sidestepped.  You can't really criticise the Production companies for largely ignoring Welsh stories -- after all, what they have to do, for their financiers and their shareholders, is to turn a profit.  And if the telling of Welsh tales is not deemed to be "commercial" enough, what they will do is use Welsh financial subsidies, studio spaces and technical expertise to the maximum allowed, while producing 99% of their films and TV series for a global audience.  And as many have observed, Wales may be used for location shooting without any mention of Wales at any stage in a screenplay.

What's to be done?  For a start, there should be a strategic target for, say, 10% of production output to be devoted to recognizeably Welsh stories.  And the Welsh Government needs to stop being so timid, and to start extracting much greater commitments from the broadcasters who want to come to Wales and use its studios and its fantastic outdoor locations.

Here is the root of the problem, on the matter of project development funding and other subsidies:

Strong preference will be given to submissions on behalf of projects which:
*are of Irish initiation in a creative sense; that is, conceived, written, produced and/ or to be directed by Irish talents
*entail new and emerging Irish talent in key creative roles, i.e. director, writer, producer, composer, principal actor
*tell Irish stories, drawing on and depicting Ireland's culture, history, way of life, view of the world and of itself

(I think we can take the above as a strong and decisive steer to project developers who are looking for funds.)

SELECTION CRITERIA
When selecting projects the following criteria will be considered:
The quality, potential and originality of the work
The benefit to Welsh filmmakers
The depic on of Welsh cultural content – Wales and Welsh life, whilst not essential this will be considered
The viability of the project in terms of budget and partnership funding and the capability of the key creative personnel
The project’s ability to qualify as a British film. Please refer to BFI website for qualification details.
The project’s market appeal. We would expect any application to clearly show an identifiable and reachable core audience and the means by which this audience will be reached.
The range and number of projects already being supported by Film Cymru Wales


(The wording here is much more vague, with far less emphasis on Welsh talent, Welsh origination, and the telling of the Welsh story. Instead of "strong preference" we have ".......whilst not essential this will be considered." So the Welsh requirement can, by and large, simply be ignored.)
Posted by BRIAN JOHN at 03:07