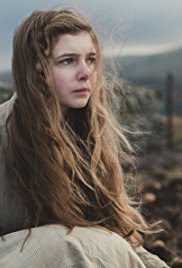 This looks interesting -- it looks like a rather low-profile film, but it's always good to see a real Welsh story, set in Wales and supported by Wales! It seems to be a rather scary and brutal horror film -- the reviews are rather mixed.  Why are so many Welsh films so dark and bloody? Answers on a post card please........

Storyline
In the stark beauty of 19th Century Snowdonia a young girl tries desperately to hold her home together. Struggling with her mother's mysterious illness, her father's absence and a ruthless mining company encroaching on their land. A growing darkness begins to take grip of her home, and the suspicious local community turns on Gwen and her family.

Review from IMDB
This is one of the scariest films I've seen in recent years despite not being a Horror. Its a slow burn, more erie and tensional to begin with. But this builds into a shocking climax as the film goes on that is genuinely terrifying.

The performances are heartbreaking especially the young lead. Without her lighting up the screen it could all get a bit too bleak. The film really rests on her. She is one to watch for the future.

Its great to see more films that focus on women as the lead characters, and although its a difficult watch in places I like the fact that this is not about supernatural evils, or a supposed Witch. Men are the real monsters here.
Posted by BRIAN JOHN at 02:43