Film and TV in Wales -- things are buzzing -- or are they? 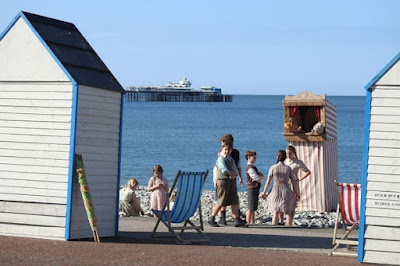 This is a standard-issue press release from the Welsh Government flagging up the film / TV activity going on in Wales just now.  Thanks to Barrie for drawing attention to it.  Of course, every Government department has to issue "good news" stories every now and then, just to demonstrate to taxpayers that they are getting good value for money!  But we must not be too cynical -- and it;'s great that there are new films and TV series being made, and that Wales continues to demonstrate that it has a vibrant TV and film industry, with great production facilities and great crews who can deliver high-quality products.

But looking beyond the spin, there is still great dissatisfaction within the industry about the cumbersome support mechanisms that exist -- to the point where some production companies refuse to have anything to do with them.  The Assembly's Culture Committee has been involved in an investigation of the support mechanisms for film and TV

Reel big year for film and TV production in Wales

Sex Education, which premiered on Netflix last week, is one of many projects made in Wales in 2018 that has hit the screen this year.

The 8 part, coming of age comedy drama follows awkward teenager Otis Milburn (Asa Butterfield) as he navigates the road into adulthood. It stars Hollywood A- lister Gillian Anderson as his cringeworthily honest, sex therapist mum. Sex Education is one of a string of productions wholly or partly filmed in Wales as a result of the Welsh Government funding to the Screen Industry.

Funding is complemented by our Wales Screen service which helps production companies by sourcing crew, locations and providing facilities support.

Other Welsh Government supported productions set for release this year include:

Watchmen (HBO) which filmed key sequences in Penrhyn Castle in North Wales. Starring Jeremy Irons, the American drama television series is based on the comic book limited series of the same name created by Alan Moore and Dave Gibbons.

The Crown series 3 (Left Bank Pictures) which includes an entire episode focussed on the Aberfan disaster. The producers used various locations in the South Wales Valleys and Cadw also closed Caernarfon castle in north Wales for the re-enactment of the investiture of Prince Charles.

Keeping Faith series 2 (Vox Pictures) is currently being shot in West Wales following the success of the first series in 2018. Starring Eve Myles in the title role, series 1 set records for viewing figures and was the highest viewed drama by BBC Wales in over 20 years. iPlayer views topped 15 million which led to BBC Network buying it and screening UK wide.

Six Minutes to Midnight (Mad As Birds Ltd.) was written by Celyn Jones and Eddie Izzard and directed by Andy Goddard. The feature film is a historical thriller based on true events that took place in Britain in the lead up to the Second World War, starring Eddie Izzard and Dame Judi Dench.

The Secret Garden (Lennox Productions) filmed key sequences at Bodnant Garden in North Wales for two weeks for the remake of the classic tale starring Colin Firth and Julie Walters.

Pitching In (LA Productions), a new Wales-based family drama, features Gavin and Stacey stars, Larry Lamb (Michael Shipman) and Melanie Walters (Gwen West). Set for BBC One Wales and BBC One Daytime, it tells the story of three generations of the same family, all struggling to make the best of a very unusual - and sometimes very difficult - situation.

Warren (Hat Trick Productions for BBC One). Original comedy series penned by upcoming writers Paul McKenna and Jimmy Donny Cosgrove, centres on the life of Warren Thompson (played by Martin Clunes), a pedantic driving instructor who thinks the world is against him.

His Dark Materials (Bad Wolf) continues to shoot at Wolf Studios and around locations in Wales. The BBC's forthcoming adaptation of Philip Pullman's trilogy of books stars James McAvoy, Dafne Keen and Lin-Manuel Miranda. The series will run for 8 parts, written by Jack Thorne with Tom Hooper directing. A second series is expected to shoot in 2019.

“Hard work and investment has helped us to develop Wales’ reputation as a five-star location for television drama production; a country that is geared up to support the sector and as a strong and affordable alternative to London.

“And there is absolutely no doubt that our proactive, industry friendly approach is paying dividends and bringing a whole host of high calibre productions to Wales.

“Of course our approach is focussed firmly on value for the tax payer and with current analysis showing that for every £1 the Welsh Government invests into TV and Film production, we are seeing an average of £8 being spent within the Welsh Economy, we will keep working to attract more and more productions to Wales.”
Posted by BRIAN JOHN at 05:28