The raven and the story 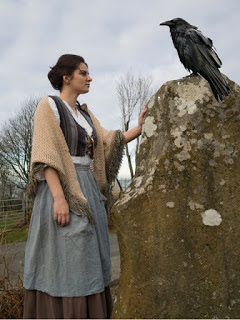 We have spent much time over the years in mulling over the significance of the raven in the Angel Mountain stories.  The bird is of huge significance, acting as an oracle and a "spirit guardian" to Martha -- and in effect acting as the angel of the mountain........

The raven -- in a slightly enigmatic fashion -- will also appear in the 90-second video teaser on which we are working.

The association of the raven with death is highlighted in an old song which comes from the thirteenth century in Scotland, which was apparently first written down in the sixteenth century.  Since then it has been modified, translated, re-worded and set to music, with the most popular version by the Pied Pipers using a Breton tune.

One version of the words is this:

As I was walking all alone
I heard two ravens call and moan
One unto the other did say
Where shall we go and dine today? 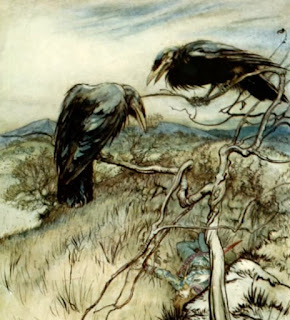 When I first heard it, I thought the words were "Where shall we go and DIE today?"  That doesn't make much sense in the context of the song -- but in those modified words there is a flash of inspiration!  Why should one spirit raven, in a world in which the bird itself is a symbol of death, not say to another "Where shall we go and die today?"  In the spirit world death is after all ephemeral, associated with transformation if not transfiguration, and of course this fits into the Christian belief system as well.

I like the corrupted version, as it opens up a simple tale (assumed to be all about the futility of war) and sends it off in quite another direction.......