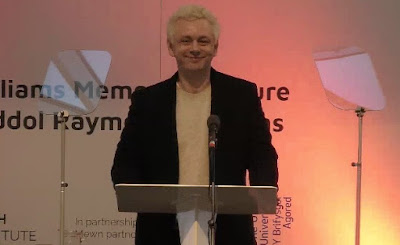 Michael Sheen pictured prior to giving his lecture.  He looks happy! A lot of the content of his lecture was deeply serious and more than a little depressing -- but we are where we are, and there is no great point in becoming too miserable about it........

On Thursday 16th Nov, in Merthyr, Michael Sheen gave the annual Raymond Williams lecture, having chosen the theme "Who speaks for Wales?"  It was quite a long lecture, at more than 90 minutes, but it was crammed with good things -- fluently presented (as one would expect), beautifully written and carefully researched.  It covered a vast range of topics, and everybody who has heard it has come away enlightened and even inspired.  It's available in two locations on the web:

One of the things I found most interesting in the talk was the short section on Welsh broadcasting, in which Michael expressed disquiet about the "sort of Wales" which is reflected to the people of Wales (and the rest of the world) by our broadcasters, including BBC Wales and S4C.  He implied, that we, the people of Wales, are being short-changed by the broadcasters, who feed us largely on a "British" diet when much of it should be much more specifically Welsh. That is not to argue that Wales should be more introverted or parochial.   He suggested that unless the current situation changes, the broadcasters will be complicit in the campaign to write Wales out of history and to deny Wales a recognition of its own character and its own narrative.

This, of course, is exactly what I have been saying on this blog for a very long time.  Why us there no strong requirement placed upon BBC Wales and the others who make programmes in Wales to tell the Welsh story alongside the telling of other people's stories?  Why is there still no big Welsh TV drama capable of selling Wales to the world?  Why do the BBC studios in Wales (and the other studios run by Pinewood and other companies) put virtually all of their efforts into the making of programmes which have nothing whatsoever to do with Wales?  Many other questions too.......  We know the answers to some of the questions, and most of the answers have to do with money -- but the politicians and the broadcasters need to consider carefully why the TV and film industry has developed as a very successful exporter of products involving minimal added value as far as Wales is concerned.  Water, coal, slate, farm products, films, TV programmes -- extracted from Wales, admittedly creating jobs, but bringing most benefits to those who live elsewhere.

Back to the Welsh narrative.   As readers will know, we played around with this earlier in the year, and came up with something like this:

"Wales is two hours and a million miles away -- a small country on the Celtic fringe of Europe. The country’s green acres have seen a valiant struggle for self determination against a powerful and predatory neighbour.  From the days of its ancient myths and native princes, to the ring of castles built by its conquerors, to its soaring rocky peaks and wild coasts, to its rich bardic and linguistic heritage, and the coal and iron that forged a global industrial revolution, Wales has always been a nation of survivors.  Melancholia features large in the national psyche -- but so does euphoria, and the old mystics talked of two fighting dragons.  Welsh people still have a powerful sense of place and an instinct for subversion and social justice.  They still have an abiding fondness for family histories, mysteries and legends, poetry and music, ceremonial and eccentric traditions.  And in Wales you will find a living language, an open-hearted generosity of spirit, a real sense of mischief, and the warmest of welcomes."

That was one version that many commentators liked.  Here is another, slightly less poetic:

"Wales is a small country on the Celtic fringe of Europe with magnificent landscapes and rich natural resources. It is too close to England to have remained truly independent, and not far enough away for bloody rebellions ever to have taken hold. Throughout its history it has fought to resist the depredations of powerful neighbours; and against all the odds it has retained its language, its culture and its pride whilst encouraging toleration and liberal values and adapting to dramatic change. It has learned how to be subversive and seductive, and how to be spiritual and mischievous at the same time. In its history it has not suffered the same deep traumas as Scotland and Ireland. Its people are romantics, prone to wild swings of emotion; both melancholia and euphoria feature in the national psyche. Welsh people have a powerful "sense of place" and an abiding fondness for family histories, legends, ceremonial and ancient traditions. Eccentricity is embraced, while great value is placed upon learning. There is a tendency towards radical protest and an ever-present desire for social reform. Ultimately, Wales wants the respect of others -- and to be left in peace to enjoy and endure its own strange obsessions.”

So, bearing in mind the points made by Michael, how do we get this story told in a manner which will increase Welsh self-awareness and self-esteem and increase the respect of the rest of the world?  We are working on it......

PS.  The text of the lecture us now available.  The PDF can be accessed here: