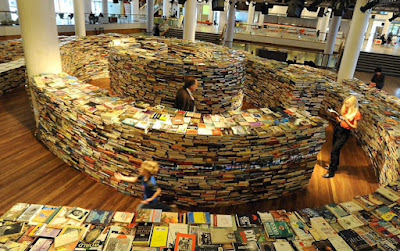 I've been around long enough to have rather a lot of contacts in the writing and publishing community -- and I was intrigued by a message today from a friend who is one of the most successful writers in Wales.

The message referred to the "perception of corruption -- real or imagined -- that exists in our profession", and drew my attention to an old adage often repeated in commercial publishing houses: "When  English writers write a book they look for a publisher --  Welsh writers look for a bursary".

I have been saying this for quite some time in this blog and in letters to the powers that be -- but I had not realised that this was a common perception among the publishing houses based in London and elsewhere.  If this is true -- and I am prepared to trust my friend in this --we should be very worried indeed.  For what it means is that Welsh writers who do have real talent and deserve to get a break in the world of commercial publishing  -- or who may simply be seeking to find an agent -- will simply be tarred with the same brush as all those in Wales who subsist on subsidies and who publish books that the market does not want and the public will not read.  Everything is devalued.  Those who ride on the gravy train think of themselves as "validated writers" because Literature Wales has shunted £3,000 in their direction, whereas their talents may be very modest indeed.   Or maybe non-existent.  And the perception spreads that  nothing good ever comes out of Wales.  Sounds familiar?

Should we be angry?  Yes, we should.  Is the system corrupt?  Yes, of course it is, when among the recipients of bursaries we see university professors who are earning salaries in excess of £75,000 per year, and others who receive multiple grants simply so that they can  (over and again) "buy time to write."  It's easy to justify the subsidy scheme on the basis that every now and then a real talent emerges from the crowd -- but the effective isolation of writers and publishing houses from the commercial realities of life MUST in the end be counter-productive.

The Welsh writing and publishing scene is frequently represented by Literature Wales as being "vibrant and exciting" -- but it is nothing of the sort.  It is more dead than alive.  So do we want the literary scene in Wales to become a laughing stock across the rest of the world, or do we want it to be respected?  If we really do want the latter, we need to cut off bursaries completely or make them conditional on actual sales performance;  we need to cut dramatically the number of books being written and published in Wales; and we need to expose the whole industry to the cold realities of the commercial world.    Is the Welsh Government  up to the task?  I wonder.......
Posted by BRIAN JOHN at 09:40