A man with a mission: Robert Owen and New Lanark 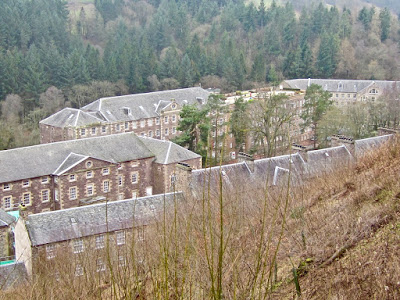 Once upon a time there was a man with a mission........  Last weekend we made a short visit to New Lanark in Scotland, on the banks of the River Clyde, to see the "utopian settlement" created by Robert Owen, the Welsh industrialist, pioneer and philanthropist.  His heyday was 1800 - 1825, and if Martha had met him she would certainly have approved.

In its heyday there were five huge factories at New Lanark, all producing spun cotton on reels for the use of the growing textile industry.  Two thousand workers and their families lived on the site, in large housing blocks.  They had just one room per family, but lived in vastly better conditions than the majority of other mill workers in the UK, with free education, access to walks and parkland, cheap food supplies, medical care and many other benefits.

The site is now a World Heritage Site, attracting around 400,000 visitors per year. 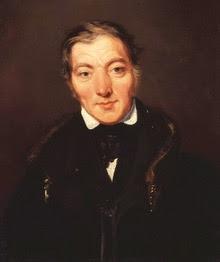 Here are two entries from Wikipedia:

Robert Owen (14 May 1771 – 17 November 1858) was a Welsh textile manufacturer, philanthropic social reformer, and one of the founders of utopian socialism and the cooperative movement. Owen is best known for his efforts to improve the working conditions of his factory workers and his promotion of experimental socialistic communities. In the early 1800s Owen became wealthy as an investor and eventual manager of a large textile mill at New Lanark, Scotland. (He initially trained as a draper in Stamford, Lincolnshire, and worked in London before relocating at the age of 18 to Manchester and going into business as a textile manufacturer.) In 1824 Owen travelled to America, where he invested the bulk of his fortune in an experimental socialistic community at New Harmony, Indiana, the preliminary model for Owen's utopian society. The experiment was short-lived, lasting about two years. Other Owenite utopian communities met a similar fate. In 1828 Owen returned to the United Kingdom and settled in London, where he continued to be an advocate for the working class. In addition to his leadership in the development of cooperatives and the trade union movement, he also supported passage of child labour laws and free, co-educational schools.

In July 1799 Owen and his partners bought the New Lanark mill from David Dale, and Owen became the New Lanark mill's manager in January 1800.  Encouraged by his success in the management of cotton mills in Manchester, Owen hoped to conduct the New Lanark mill on higher principles than purely commercial ones. David Dale and Richard Arkwright had established the substantial mill at New Lanark in 1785. With its water power provided by the falls of the River Clyde, the cotton-spinning operation became one of Britain's largest. About 2,000 individuals were associations with the mill; 500 of them were children who were brought to the mill at the age of five or six from the poorhouses and charities of Edinburgh and Glasgow.  Dale, who was known for his benevolence, treated the children well, but the general condition of New Lanark's residents was unsatisfactory. Over the years, Dale and his son-in-law, Owen, worked to improve the factory workers' lives.

Many of the workers were in the lowest levels of the population; theft, drunkenness, and other vices were common; education and sanitation were neglected; and most families lived in one room. The respectable country people refused to submit to the long hours and demoralising drudgery of the mills.

Until a series of Truck Acts (1831–1887) required employees to be paid in common currency, many employers operated the truck system that paid workers in total or in part with tokens. The tokens had no monetary value outside the mill owner's "truck shop," where the owners could supply shoddy goods and charge top prices.  In contrast to other employers, Owen's store offered goods at prices slightly above their wholesale cost.   He also passed on the savings from the bulk purchase of goods to his workers, and placed the sale of alcohol under strict supervision. These principles became the basis for the cooperative shops in Britain, which continue in an altered form to trade today.
Posted by BRIAN JOHN at 08:51