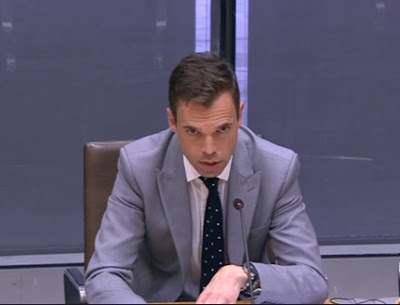 Yesterday the Welsh Assembly Culture Committee held its final investigation into the findings of the Medwin Hughes Panel Review, with half an hour or so spent grilling Minister Ken Skates and his top civil servants.
Attending:

Ken Skates AM, Cabinet Secretary for Economy and Infrastructure
Hywel Owen, Media Policy Team Leader, Welsh Government
Paul Kindred, Senior Policy Analyst, Welsh Government
Peter Owen, Head of Arts Policy Branch, Welsh Government
There was a live stream of the meeting, and the transcript will soon be posted on the Assembly web site, probably here:
http://senedd.assembly.wales/ieListDocuments.aspx?CId=445&MId=4374&Ver=4
The webcast of the meeting is still available.
Here is the BBC report:
http://www.bbc.co.uk/news/uk-wales-41497925

My own impressions, gained through listening to all the diplomatic language and trying to read the signals:

1.  The Minister defended the integrity and skill mix of the panel, which I suppose was only to be expected, since he is the one who chose the panel members!  But he also defended their findings and recommendations, and it seems to me that he is still minded to accept them and to implement them, unless the Committee comes up with powerful reasons why he should not.

2.  The Minister repeated his criticism of the attacks by Literature Wales on the integrity of the Panel members.  Quote:  "I do not believe that the criticism and - at times - attacks that some of the panel members have had to endure have been acceptable whatsoever."  He made this point a couple of months ago, and the fact that he repeated it yesterday without much prompting signals that he is not in a very forgiving mood as far as Literature Wales is concerned.  He also demonstrated a degree of frustration about the apparent refusal of LW to accept that there were any shortcomings in its own operations.

3.  There was a lot of probing from Lee Waters AM into the characterisation of Lit Wales as a "red risk" organization -- which implies real concerns about its governance and use of public funds.  The civil servants seemed to disagree on just how deep the risk was and is, but they did agree that the risk was not just associated with the fact that there was Panel scrutiny of its operations.  It went much deeper, said one of the civil servants, and pre-dated the setting up of the Medwin Hughes Panel. When the Minister was also pressed, he stated that he accepted the "red risk" designation, and the Panel's criticisms of Literature Wales, on the basis of material which has not been released into the public domain.  He offered to show some of this material to the Culture Committee  -- so the Committee will now see it before it releases its own report.

4.  The Minister agreed that the manner of setting up a Panel such as the one chaired by Medwin Hughes was not as good as it might have been, and that a more transparent process might be required should a future Panel be set up to revisit the matter of publishing and literature in Wales. (The main issue this time was not one one of impartiality and vested interests, but the lack of a publisher amongst the panel members.)  He hinted that another investigation might not be too far away...........

5.  As the BBC reporter noticed, the Minister agreed that the literary and publishing scene is riven by factions and disagreements, and that the "status quo is no longer acceptable."  In saying that the sector had to be "strengthened" and in stressing a more effective use of public funding, that signals to me that Literature Wales will be cut down to size or maybe abolished altogether.  It was interesting that he said hardly anything that was complimentary about the organization's delivery of "core services" -- while accepting that its input into "peripheral activities" in cooperation with Visit Wales etc had been good.   So there he has a dilemma -- would the delivery of "literary events" associated with Roald Dahl, Dylan Thomas etc not be better served by bringing a couple of literature officers onto the payroll of Visit Wales? (It's worth recalling that one of the Panel's main criticisms of LW was that it has become obsessed with empire building and project delivery, rather than with "enabling" or "encouraging" literature and supporting writers.)

Literature and publishing organisations that receive public money will not be allowed to maintain the status quo, the economy secretary has said.
Ken Skates told the Assembly's culture committee he was still considering what changes to make but insisted the situation could not remain the same.
A review into the sector recommended sweeping changes.
It included transferring many of the responsibilities of Literature Wales to the Welsh Books Council.
Mr Skates told the assembly's culture committee: "Whilst I have made no decision on the recommendations that have been forwarded to me, I certainly think the status quo is no longer acceptable."
Literature Wales received £717,000 from the Welsh Government through the Arts Council of Wales last year to promote literature, while the Welsh Books Council received £3.5m from the government to publish and distribute books.
Professor Medwin Hughes chaired a panel that reviewed the work of both organisations, and assessed the wider sector.
Since the review's conclusions were published in June writers including Phillip Pullman have defended the work of Literature Wales, while its chairman called the review a "dud".
Literature Wales and the Arts Council of Wales have also questioned the accuracy of the report and perceived conflicts of interest among members of the review panel.


Others, including the Welsh Books Council, have approved its findings.

Mr Skates said he had been "very well served" by the report and defended the panel.
"That vociferous response did not surprise me.
"Whilst I accept that emotions have been running quite high on this, I do not believe that the criticism and - at times - attacks that some of the panel members have had to endure have been acceptable whatsoever."
Mr Skates said he would wait for the publication of the assembly committee's report on the subject before announcing any changes, but that the public funding involved meant the sector had to be "strengthened."
"This is about making sure that we make best use of taxpayers money, that we strengthen the sector, that we serve the interest of the sector and ultimately the interests of the people of Wales."
Last week, Prof Hughes defended the review to assembly members.
He said its findings were based on evidence from key organisations and 800 written submissions.
Posted by BRIAN JOHN at 02:42