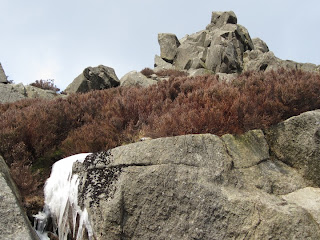 The "effusion" of ice (the milk of the Earth Mother?) near the summit of Carningli at the end of March 2013.  The adjacent crag is the tip of the "breast" on the female profile of the mountain when seen from a distance.

Now here's a very funny thing for you....... when I was climbing up the mountain the other day, in very cold bright weather, my eye was attracted by a shining white patch high up, close to the summit. When I got there, it turned out to be an effusion from the highest spring on the mountain, frozen solid. And where was it located?

Well, you know that the mountain has the profile of or silhouette of a woman lying on her back? To the left the head, then the breast, and then the rib cage, and finally the raised knees to the right. Some people think that this profile caused the mountain to be revered in pre-Christian times as the Earth Mother or Earth Goddess. And where, I hear you ask, was this unique effusion of shining whiteness located? Well, very close to the tip of the breast. How weird is that?

It is after all April 1st, so one can be more than a little eccentric just now.......  but if Carningli was indeed revered as a sacred mountain, associated with some female deity, the "female profile" of the mountain summit might have had something to do with it.  But how much more impressive might it have been for the primitive mind if, every now and then (during a continuous spell of very cold weather without snow),  a white liquid was seen coming from the breast high up on the mountain summit.  The milk of human kindness? The original sustenance for human life?  A sign from the gods?   Well, why not?
Posted by BRIAN JOHN at 13:39 No comments: