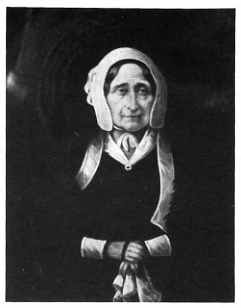 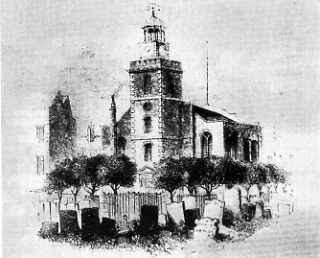 The Church of St Mary Abbot on Kensington High Street, London, where James and Jane were secretly married in 1810.  The church was demolished in 1869.

I discovered that my Great Great Great Grandpa James Hoole (the one who emigrated to South Africa with his wife Jane) came originally from quite a wealthy family in the Chester area. In 1794, when he was 5 years old, his nursemaid took him and his little sister (who was 3 years old) out for a walk. The nursemaid realized that she had forgotten something in the house, and so she ran back to fetch it, telling the children to wait in the lane until she got back to them. When she returned, she found James weeping bitterly, and the little sister gone. All James would say was that a lady in a shawl had taken her away.

There was a frantic search, but several days had passed when they at last found the little girl, quite naked and battered and bruised, under a hedge. Apparently the gypsies had taken her, just to steal her clothes and the coral necklace she had around her neck. The parents took her home, where apparently "she cried for three days without stopping and then died." The shock and horror of this episode caused the poor mother to die shortly afterwards, and then the father died too, leaving James an orphan. There were no relatives to take care of him, and so the nursemaid took him away across the border to her home in Wales, where she raised him as her own son -- in conditions of great poverty and with no education at all until a local clergyman took him in and taught him how to read and write.

Having received a modest education in the household of that kind clergyman (whose name is unknown) James was sent to London (around 1805?) to see if he could make something of his life. He was not very ambitious, but he was bright enough, with an honest face, and he obtained a position as a secretary with a blind gentleman named Mr Fitz. The employer was quite wealthy, with business interests in London and Paris.

The Fitzes had one natural daughter and an adopted daughter called Jane Cotterell, who was actually their neice.  She was, like James, an orphan.  She had experienced a very unhappy childhood with parents who seem to have been unable to look after a family consisting of one son and "many daughters". When Jane was ten, her parents had died within a year of one another, and her mother had dropped dead (presumably from a heart attack) right before Jane's eyes.  She later admitted that her overwhelming emotion at the time was not sadness, but relief that she would no longer be beaten. The family was split up, with Jane being sent to London to be adopted by Mr and Mrs Fitz.

When James arrived to take up his position, he and Jane got on very well, and eventually they started to fall in love. They were both orphans who had suffered a great deal of trauma in their young lives, and they were about the same age.  Jane was not particularly beautiful, but she was bright, intelligent and strong-willed.  James was amiable, gentle and kind hearted.  He was also a very handsome fellow, and he retained his good looks throughout his life.  They were still very young, and Jane's uncle and aunt were concerned when they saw what was happening. They had plans for Jane to marry a young officer, but she was not at all interested in the idea. At last, in the year 1810, in an attempt to force the young people apart, Mr Fitz announced that he would send James off to work in his Paris office, and that the young man would set off for France the very next day.

But Jane and James were made of stern stuff, and they knew their hearts and their rights, and early next morning, while Mary the cook was making breakfast, Jane appeared and convinced her to go with James and herself down the road to Kensington Parish Church.  (This was the church of St Mary Abbot, on Kensington High Street, which was demolished in 1869.)  They were married there without further ado, with Mary as witness, on 25th November. The cook was sworn to secrecy, and Jane determined that she would keep the wedding ring on a silk thread around her neck, under her clothes. Then James was packed off to Paris, to the relief of Mr and Mrs Fitz.

There were bound to be repercussions, and indeed there were........
To be continued!