Where shall we go and die today? 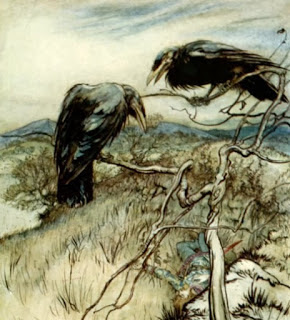 As followers of this blog will recall, I have an abiding interest in the folklore associated with ravens -- are they angels, or are they demons?

In a previous post I discussed ravens in the context of a very old Scottish lament,  which begins with the words:

As I was walking all alone
I heard two ravens call and moan
One unto the other did say
Where shall we go and die today?

In the recording of the song by the Pied Pipers, the singer slurs his words, and I was quite convinced that he asked "Where shall we go and die today?".  Actually the word is "dine" -- but the song gets invested with much greater significance -- and becomes quite mystical -- if we use the word "die"instead .............

In these strange and tragic times, with more than 40,000 deaths in the UK because of the Covid19 pandemic, poets may well be conjuring with the raven metaphor as we speak, in composing their own laments.  And here is a strange thing -- add a letter to Covid19 and we get "Corvid19".  The raven is of course the largest and most powerful member of the Corvid family of birds, and in much of the mythology of Northern Europe the bird is considered a harbinger of death.