The inspiration of the Grossi Gang 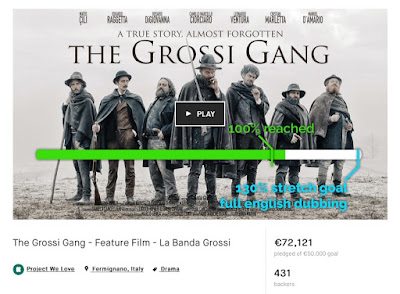 This is one of the most inspiring film stories of recent times.  The Grossi Gang operated in Italy in the 1860's -- a group of seven outlaws who were protesting against the high taxes and the rural hardship associated with the turbulent creation of the Italian state from an assortment of small provinces.  An Italian "Magnificent Seven", or a more or less perfect western film set in Italy.  The film Sergio Leone might have made, if he could have got the financial backing.  So he went off and made spaghetti westerns instead -- and the rest is history.

Anyway, Claudio Ripalti and 13 of his friends (all film professionals) decided that they wanted to tell the story of the Grossi Gang because it is one of the most appealing stories in Italy, covering a key part of nineteenth century social history.  They found it very difficult to get the project off the ground -- but then a film studio called Cinestudio offered the crew the free use of its studio space, equipment and editing suite if they could raise the capital needed to bring the film to fruition.  So in late 2016 the team embarked on a Kickstarter campaign, designed to raise 50,000 Euros.  Their key weapon in the campaign was a 3 minute "proof of concept" trailer, done on a shoestring.  It's very impressive:

The Kickstarter Campaign was very successful, raising almost 80,000 Euros -- and with this cash in the bag the location shooting was done in two months in the spring of 2017.  The film was released in 2018, and in 2019  a version with English subtitles was premiered in the USA.

The full-length feature film (lasting 1 hr and 53 mins) appears to have been well received in Italy -- and it is extraordinary what Claudio and his crew have been able to achieve on such a miniscule budget.........


In central Italy, during 1860, a poor farmer by the name of Terenzio Grossi manages to form a gang composed of young rebels, his goal to try and revolt against the newly formed Piedmont State. Disillusioned with politics, hungered by ever-increasing taxes and unwilling to participate to mandatory draft by the army, the gang will seize the Pesaro and Urbino Province with the help of a growingly restless and angry population. In two years of crimes, violences and murders at the expenses of the richest and noblest, the gang will rise to its fortune in spite of coward and unprepared local authorities. Only one soldier will pick up the fight and stand fearless in the line of duty: a brigadier of the Reali Carabinieri determined to capture Terenzio and his gang mates at any cost. An irrepressible man of great integrity, the Brigadier will have to grow aware of the poor conditions of the villagers of the area and when law will start making compromises in the fight against crime his conscience and uprightness will be challenged.

When I asked Claudio how on earth they had managed to bring this project to fruition, in the light of the real costs of film production in the UK and elsewhere, he replied thus:

The assumption is no different in Italy, broadly speaking this movie might cost a couple of millions of Euros if produced conventionally, was it not for the partnership with Cinestudio which allows us to produce it on a very tight budget by providing equipment, personnel (we are also talking about costume designer, composer, sound designer and so on, not only field/stage technicians...), vehicles and stages (sound mixing as well).
The budget for the movie is 200K and Cinestudio also backed a part of those but their main input is obviously not monetary but rather what described above, which equally translate to money in the end.
The other reasons behind such a low cost is that it is an indie movie, so the key roles professionals accepted indie-wages (and a share of profits) in exchange for the possibility of being part of a movie they felt connected to.
Posted by BRIAN JOHN at 13:14