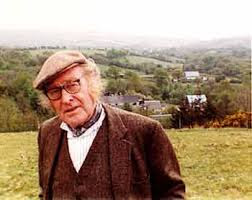 It's interesting to see this piece about John Seymour and the "self-sufficiency idealists" who flocked to Wales -- and to north Pembs in particular -- in the 1960s and 1970s.  So was there an authentic "peasant society" in north Pembs at the time?  No way -- a part of it might have been "authentic" to an extent that satisfied John and Sally when they first came here.  But as they soon discovered, the community in this area is and was just as complex and multi-layered as any community anywhere.  And the idea that John went off to Ireland after a while because Wales had become "insufficiently authentic" is pretty cockeyed too.  As in all cases where somebody moves out of one place and into another, rather complex push and pull factors were at play........

Land of song or savages? Why the English get Wales so wrong

For those who cross the border dreaming of a mythic retreat of crags and castles, reality can bite hard

Extract: Over the past half century, the trickle of English idealists escaping to Wales has become a torrent. Godfather of them all was John Seymour, author of bestsellers The Fat of the Land and The Complete Book of Self-Sufficiency, who bought a farm in Pembrokeshire in 1964: “I was back in a peasant society where people still brewed beer and killed pigs and we were no longer freaks,” he wrote. In the late 1980s, he too flounced out of Wales, declaring that it was by then “insufficiently authentic”, whatever that meant, and resettling in Ireland. Other green gurus have since come and gone, often hurling disappointed brickbats as they depart.
Posted by BRIAN JOHN at 04:01 No comments: