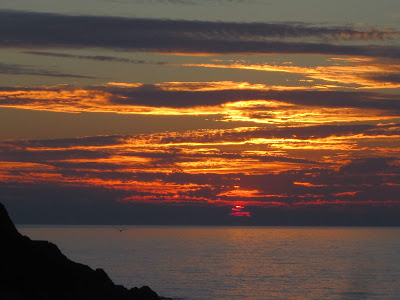 This is a draft for a forthcoming book -- I'd better not reveal the name of the author or the title just yet.  All will be revealed in due course.......

Martha Morgan Country
Martha Morgan, whose name has come to personify the territory around Carningli overlooking Newport, arrived fully-formed in the course of one night. She appeared as an apparition, suggestive of a reincarnation, and insisted that what happened to her between the years 1778 and 1855 should finally be told.

Oddly, the moment she chose to appear was when Brian John, who himself lives on the slopes of Carn Ingli, was after he had stepped off an aircraft in Gran Canaria in the winter of 1998. ‘I suddenly felt terrible;’ he told me. ‘It was as though I had flu. My temperature shot up, I had a headache and began to shake and shiver. I reckon it was what they call Aerotox syndrome, from breathing in the air they pump round the aircraft.’

When Brian and his Swedish wife Inger reached their holiday apartment he immediately went to bed, but he didn’t sleep. Instead he became delirious, and that was when Martha appeared. “It wasn’t a dream,’ he said. ‘I was wide awake. My mind was buzzing. It was almost as if I was in a state of drug-induced consciousness. I had a heightened sense of awareness.’

Martha was a compellingly beautiful and passionate young woman with long dark hair and brown eyes. ‘As I lay there in the warm darkness gazing at the bedroom ceiling she was talking to me,’ Brian said. ‘At breakneck speed she told me the story of her life, with details of places, people she knew, twists and turns in her life, even snatches of conversation.’

In the morning he felt better, but Martha’s message was firmly fixed. ‘Somehow I knew her story had to be told in her own words, not retrospectively, but with immediacy, through the entries of a diary she had kept,’ Brian said. ‘You see it wasn’t a dream. If it had been I wouldn’t have remembered.’

So he took out his laptop and started writing, and didn’t stop for eight years. By that time eight hefty volumes had appeared, creating the Angel Mountain Saga.

Brian John was already a well-established writer before he embarked on Martha’s story, though in a very different field. He had published getting on for eighty books on the Pembrokeshire landscape, folklore, fauna and flora. Brought up in Haverfordwest he had studied at Oxford in the 1960s, become a field scientist with the British Antarctic Survey, and then a Geography Lecturer at Durham University.

But in the mid-1970s he made an unusual career move, leaving the security of academic life to return to Wales with Inger. They joined a growing band who were moving into the Preseli hills to adopt a more self-sufficient, ecological lifestyle. On their smallholding Brian established a publishing enterprise, supplemented by Inger’s candle-making business.

At first Brian found writing fiction difficult. He had to discover ways of developing character, plot and pace, and a sense of place. He also had to think himself into the eighteenth and early nineteenth centuries, researching patterns of speech, social customs, beliefs, farming routines, food, clothing and the political events of the time.

Most difficult was portraying the character of a pregnant, suicidal mistress of a small country estate, and to speak through a diary format. Yet, as Brian put it, ‘I felt to do otherwise would have been to betray what I can only think of as the gift of that story I was given one night in Gran Canaria.’

The undertaking is reminiscent of Winston Graham’s Cornish melodrama Poldark, covering the same period with its tempestuous female character Demelza, and also A Scots Quair, the 1930s trilogy by the Scottish writer Lewis Grassic Gibbon, describing the life of another feisty woman from north-east Scotland in the early 20th Century.

They all rely heavily on their settings. In the case of the Angel Mountain Saga it is the mountain itself with its myth that if you spend a night at its summit you either become a poet or go mad. It’s one of the largest Iron Age hill forts in west Wales, with a volcanic profile that can be seen from miles around. The name comes from the legend of Saint Brynach who used to climb the mountain to find serenity and commune with the angels. In Brian John’s stories his heroine Martha also has a special relationship with the mountain, close to whose summit she struggles with and kills a bitter enemy and finally finds sanctuary.

Brian wondered if she might have been a real person in the area in the early nineteenth century and searched the records. He found several Martha Morgans but they were all more lowly people who lived as far afield as St Davids and St Dogmaels. There was one who lived in the Newport area but much later than his heroine.

It took him eighteen months to complete On Angel Mountain, the first volume in the series. Then came the challenge of publication. He contacted more than fifty agents and about the same number of publishers between 2000 and 2001, but to no avail. ‘Nobody was interested in reading even a chapter’. So he decided to self-publish. The first print-run of 2,000 disappeared in two weeks, and the book had to be reprinted three times. Encouraged Brian carried on, producing four more novels at the rate of one a year.

At the end of the fifth novel Flying with Angels, Martha Morgan dies. But popular demand forced Brian to resurrect her and write three more novels, in part by going back to fill gaps in her story. Whether there are more novels to come is moot, but I suspect there may be.

By now the Angel Mountain Saga has attracted a cult following and sales exceeding 82,000. More than that Martha has given her name to a large tract of northern Preseli as a cultural tourism initiative, supported by the National Park and the county council. It has become Martha Morgan Country – ‘all about this strange thing called a sense of place … now we follow Poldark Country, Shakespeare Country, Hardy Country, Wordsworth Country, Jane Austen’s Bath, Charles Dickens’ London and Cookson Country with something from Wales. And it has nothing at all to do with Dylan Thomas…’

An elaborate website features Rhiannon James of St Dogmaels, a former Miss Pembrokeshire – who happens to have long dark hair and brown eyes – acting as Miss Martha. She has been photographed, suitably garbed, in multiple locations associated with the Angel Mountain Saga.

Will the idea of Martha Morgan Country catch on? I suspect the answer will come down to authenticity. Will the hallucinations of one man in the course of a night in Gran Canaria, subsequently published to local acclaim, make an indelible imprint on Preseli? Naturally, Brian John has no doubt. His conviction is reinforced by a sense that Martha Morgan’s story is an allegory for the story of Wales itself. A plot running through the novels is of her desperately clinging on to the estate she has inherited against the depredations of rival claimants to the land.

‘It seems to me that much of the history of Wales has been about its being a desirable bit of real estate which other people, especially the English, have being trying to get their hands on,’ he explained. ‘In the face of such a persistent assault, over decades for Martha and centuries for Wales, how do you sustain your integrity, your self-esteem, your identity? That is a central issue for Martha as it is for Wales itself. As time has gone on, more and more I feel that that in telling the story of Martha on her rough piece of land in far-flung Preseli, I’ve been telling the story of Wales as well.’

And he adds, ‘I did not realise at first, but as the writing of the novels proceeded, I came to appreciate that Martha is actually Mother Wales, personifying all that is good and bad about my native land. A key thing about her personality is her sense of hiraeth, of longing and belonging. She really feels that her home Plas Ingli, and Carningli are a part of her, as she is a part of them.’
Posted by BRIAN JOHN at 13:51