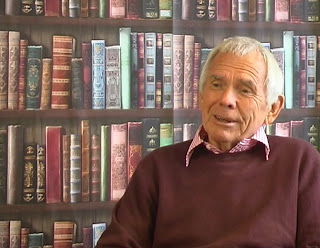 Not long ago I did an interview for Showboat TV (based in Pembroke Dock) — with author Judith Barrow as interviewer.
Go to the main page for the TV station:
http://www.showboat.tv/
And click on “Booksmart - Brian John” to watch the interview.  Quite wide-ranging — and it was nice, for a change, not to be restricted to a couple of minutes........
Enjoy!
Posted by BRIAN JOHN at 06:14 No comments: Links to this post 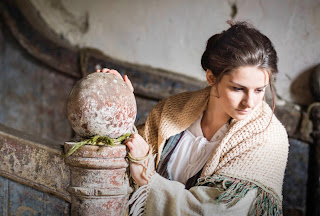 ..........for better or for worse, Martha is a nineteenth-century version of super-woman. From the beginning she is very beautiful and very sexy, and as she blossoms into womanhood she gains a reputation as the most beautiful woman in Wales. Little wonder that many readers said, when they first encountered her, that Catherine Zeta Jones had to play her when the film came to be made! She is well educated, and has a very inquiring mind. She is a competent musician and a moderately talented artist. She speaks English, Welsh, French and Dimetian Welsh fluently. She reads widely, and is attracted to “subversive” or radical literature. Her liberal views frequently lead her into trouble, and it is quite natural that she should be concerned about the plight of slaves and convicts and all those who might be oppressed or victimized by the crown, the government, and impersonal institutions. She has concerns about voting reform and womens’ rights, and she sympathises with the Chartists -- at least until they start to split apart and lose control of extremist elements. She is immediately drawn to the Rebecca Rioters since she understands what their grievances are and sees (better than most of her peers) what happens to families struggling against poverty and disease. She is not particularly religious, but goes through the motions of being a worthy member of the established church and goes through life trying to be a “better person.” She flirts with Methodism for a while, and finds the devotion and kindness of the Non-conformists appealing. But at the same time she is irritated by their evangelical zeal and their unshakeable conviction that they are saved while others are condemned to hellfire and damnation. She is, as she admits now and then in the pages of her diaries, not averse to a little jolly sin now and then. She is also perfectly happy to shelter criminals, to drink smuggled gin, to tell lies, and to withhold her tithe payments in protest against the arrogance and insensitivity of the Church.

But Martha has a host of virtues too. She is brave, loyal to her husband and her family, and fiercely protective of those in her care once she is widowed and responsible for the safety of the Plas Ingli estate. She has enormous generosity of spirit, and makes spontaneous gestures of support when others might back off. Think about the welcome she gives to Patty the prostitute, or to Will the petty criminal, or to Zeke Tomos, who goes on to betray her. She often acts impulsively and on the basis of intuition and instinct. She makes huge self-sacrifices for the good of others. She puts herself in danger over and again, often because she is seeking to help those who do not necessarily deserve her assistance or her loyalty. For example, she plunges into the task of helping the sick and the dying during the cholera epidemic of 1797 without any thought for her own wellbeing. She goes to Ireland to help the starving during the Irish Potato Famine, and becomes seriously ill in the process. She sees beauty all around her, and takes an almost child-like pleasure in simple things -- such as standing on the mountain-top in the wind with her hair streaming behind her and her arms stretched out wide. She loves her children and her grand-children, and welcomes back Daisy, the black sheep of the family, when she returns after years of loose living in London. She fights to keep her family together when stresses and strains occur because of grief, or bankruptcy or other disasters. On those occasions she is a diplomat as well as a matriarch. In some ways she is also naive, and has a tendency to think well of others when suspicion might be more appropriate. But she trusts her family and her servants to look after her when she makes misjudgments, and indeed they do just that. She is a prudent and wise estate manager, and she knows how to inspire loyalty, give responsibility to others, and reward enterprise. She never stops learning, and wants others to learn and to better themselves -- to the extent that she becomes a great benefactor of the Circulating Schools. She is generous to a fault, and one of the ironies of the Saga is that having protected her precious treasure and left it in the ground as a “family insurance” for more than fifty years, she finally digs it up and gives most of it away.
Posted by BRIAN JOHN at 12:27 No comments: Links to this post

The sad story of “The Lan” 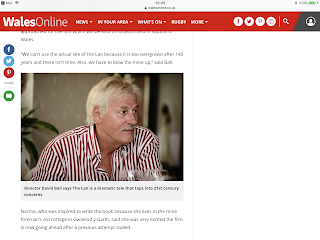 Some years ago a number of well-known politicians (including Carwyn Jones, Tony Benn, Jane Hutt, Dafydd Wigley and Rhodri Morgan) endorsed and supported an ambitious project designed to bring the Gwaelod y Garth mining disaster of 1875 to the screen.  The story of the disaster was told in a book called “The House of Abraham Phillips” by Norma Procter, and it looks as if she also provided the screenplay for the project.  Initially (in 2014) the director was going to be Gabriel Beristain, but in the final push to get the film made (in 2016) David Ball was listed as director.  David, a film industry professional with particular expertise in film finance, seems to have been the most vociferous proponent of the project.  There was lots of coverage in the press, and it was flagged up that Catherine Zeta Jones and Rhys Ifans had been offered roles.  It was never reported that they had actually accepted.....

In the most recent press release (February 2016) it sounded as if the filming was ready to start, with some finance already offered and some still be to found.

However, in spite of the involvement of the politicians and the obvious social and cultural importance of the project, the film was never made.  There was a financial shortfall, and by all accounts Pinewood (which then effectively controlled the purse strings) refused to put Welsh funding in on the grounds that the film was not “commercial enough.”    Maybe it was too “political” or too preoccupied with the eternal struggle between the capitalists and the workers — or maybe there were fundamental defects in the business plan or in the screenplay.  Maybe we will never know the full truth.

David Ball says that he still hopes that the film will be made one day — but the signs do not look good, with two attempts already having failed.....

Here is some of the enthusiastic Western Mail coverage:

Https://www.walesonline.co.uk/whats-on/film-tv/grandmothers-story-cardiffs-mining-disaster-10876388
Posted by BRIAN JOHN at 06:29 No comments: Links to this post