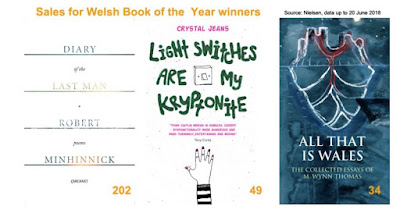 
This is a weird article from Literature Wales, flagging up the wonderful impact of the “Book of the Year” award on book sales. It’s in response to a critical article on the BBC Wales web site.

In the BBC feature, mention is made of the fact that one of the shortlisted books (“Bad Ideas -Chemicals”) had sales listed by Nielsen of only 20 copies, while others had recorded sales of less than 100 copies. “Light switches are my kryptonite” by Crystal Jeans sold 49 copies; “All that is Wales” sold 34 copies; and a Welsh-languages title by Hefin Wyn sold 43 copies. On the other hand the best-selling book on the shortlist — a biography of David Jones — sold around 4000 copies, which is a respectable figure by any measure.

Y Lolfa put out a statement to the effect that all of its titles on the shortlist had actually sold more than 600 copies, declaring itself well pleased with these figures. This confirms in my mind the weird assumption that anything that sells 700 copies is considered a best-seller. (Speaking for myself, if any of my books was to sell less than 1000 copies I would consider it a miserable failure, and would
certainly not want to let the world know about it......)

I fully agree with Literature Wales and other commentators that the EPOS sales figures released by Nielsen only tell part of the story, since many small bookselling outlets in Wales do not belong to the
EPOS system. Nonetheless, BBC Wales has done a valuable service in bringing these figures to public attention, and we should all be appalled. Books that’s have EPOS sales figures as low as these should probably never have been published — and would certainly NOT have been published were it
not for the extraordinary subsidy system which keeps Welsh publishers and writers afloat, and protects them all from commercial reality.

The Literature Wales defence of the shortlist and of the value of the competition makes matters worse by flagging up the percentage increases in sales that have occurred as a result of the publicity associated with the competition. A 400% increase in the sales of a book that had previously sold only 20 copies still looks pretty miserable to me! And this has to be the most wonderful mathematical calculation of the year: “Pigeon went from selling three copies before the announcement in November to 46, representing a 1,433% boost week on week.” Ah, the enmdless beauty of statistics..........

Thus far I have been a lone voice — on this blog — in raising the issues of heavy subsidies and pathetically low sales figures in Wales. Now that the BBC has homed in on it, let’s hope that somebody pays attention and accepts that the myth of a vibrant Welsh publishing industry is not worth the paper it is written on. And while we are about it, might we suggest that the worth of a book is not measured by the prizes it wins, or the promotional activity of Literature Wales or Welsh Books Council, but by its sales figures?