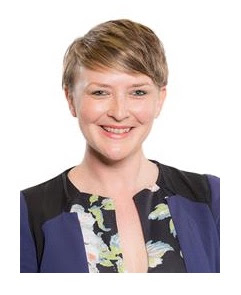 Bethan Sayed AM, Chair of the Assembly Culture Committee

Previously we have commented on the dealings of the Assembly's Culture Committee, which had been asked by Minister Ken Skates to review the findings of the Medwin Hughes Panel on the support mechanisms for literature and publishing in Wales.  I bet the Minister wishes he had just gone ahead and made some decisions, since the situation has now become incredibly messy -- and it looks as if it will drag on for many months yet.  Nobody will be satisfied..........

I had a sense from the deliberations of the Committee that they were moving towards a position of "Better the devil you know than the devil you don't" -- and I think my supposition was probably right.  They are now being critical of the Medwin Hughes Review Panel, critical of Literature Wales (especially its leadership) and generally unhappy with virtually everything.  The Committee wants further analysis of the suggestion that many of Literature Wales's functions should be transferred to the Welsh Books Council.  Quote from the BBC Report:  "The committee now wants the Welsh Government to publish all relevant documents and the minutes of the independent panel's meetings."  This could drag on for many months yet -- to the further detriment of the literature and publishing industry in Wales.

I'm a bit mystified by the reference to the Panel's observations on the "decline of the publishing industry" in Wales.  That was not my reading of the Panel Report -- it certainly stressed that the industry was CHANGING because of changing technology and social trends, but change does not mean decline.

Then we have this:

The report also quotes committee member Dawn Bowden, who called into question the public funding that is given to literature and publishing by the Welsh Government.  The Labour AM said during one evidence session: "I get the distinct impression that we've got a sector here that's rife with factionalism, rivalries and jealousies that, quite frankly, leaves me wondering why the Welsh Government's even bothering to finance some of these organisations."

This is a matter which received inadequate attention from both the Medwin Hughes Panel and the Culture Committee.  As I have said many times before on this blog, the "subsidy culture" which pervades the literature and publishing scene in Wales MUST be addressed, because nobody is effectively demonstrating that the largesse pushed in the direction of both writers and publishers in Wales provides real value for money to taxpayers.  The conspiracy of silence over the appallingly low level of SALES of supported books is a disgrace, and somebody needs to say so.

It looks to me as if the subject of the Medwin Hughes Panel Review is being pushed into the long grass.  It's all profoundly discouraging.


A saga over a critical report into publishing and literature in Wales has taken another twist.

A controversial independent review last summer claimed Literature Wales was unfit to receive public funding or was in danger of collapse.

But the Assembly's cross-party culture committee has now found "little evidence" for that conclusion.

It also says a proposal to transfer responsibilities to the Welsh Books Council needs further analysis.

Literature Wales was created in 2011 to promote and develop reading and writing and had an income of about £1.2m in 2016.

The Welsh Government-commissioned review, led by Prof Medwin Hughes, vice-chancellor of the University of Wales Trinity Saint David, described the organisation as "lacking the skills and experience" to spend public money.

Economy Minister Ken Skates, in response last summer, had been minded to accept the recommendations.

The review included proposals that several responsibilities would transfer to the Welsh Books Council instead, including the Wales Book of the Year award,bursaries for writers and literary events.

New Culture Minister Dafydd Elis Thomas has since said that the award will remain with Literature Wales for this year at least.

He has been waiting for the committee's report before giving the Welsh Government's official response to Prof Hughes's report.

Literature Wales' head had claimed the review was a "dud", filled with "inaccuracies".

Arts Council Wales was also critical of the review, calling it "deeply disappointing".

The committee's own examination of the review has now found:

"Further critical analysis of the benefits and implications" of the transfer of responsibilities from Literature Wales was needed and it was "not convinced" that the practicalities and costs have been thought through.

Analysis of the decline in publishing in Wales was "insufficient" and raises more general concerns about the review panel's evidence base.

Committee chairwoman Bethan Sayed said they were "uncomfortable" at the way in which the debate around the review had been framed and were "not convinced" by some of the evidence.

While AMs found no evidence to support the suggestion that Literature Wales was unfit to spend public funds, the committee was critical of its leadership.

It said Literature Wales' "overly defensive response" to the report did not cast the organisation in a good light or contribute to "a mature debate on the future of the sector."

The report also quotes committee member Dawn Bowden, who called into question the public funding that is given to literature and publishing by the Welsh Government.

The Labour AM said during one evidence session: "I get the distinct impression that we've got a sector here that's rife with factionalism, rivalries and jealousies that, quite frankly, leaves me wondering why the Welsh Government's even bothering to finance some of these organisations."

But the committee praises the integrity of the review panel although in its conclusions it says its work was flawed due to an "absence of analysis" on the decline of the publishing industry and emergence of literature on digital platforms.

The committee now wants the Welsh Government to publish all relevant documents and the minutes of the independent panel's meetings.

Prof Hughes, when he gave evidence to the committee, said he had "observed a lot of arrogance" in the criticisms following his review.

But he also told assembly members they would be "shocked" by some of the accounts he was given of the industry.
Posted by BRIAN JOHN at 14:35