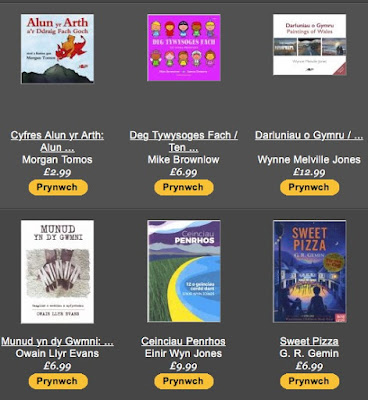 With overall sales declining, the Chief Exec of the Welsh Books Council is obviously trying to put a positive spin on the situation, but I'm not sure we can call this "a golden age" just because a few fiction authors are achieving reasonable sales. From the article, it's clear that any title that sells 1,000 copies or more is counted as being a major success. And "Martha Jac a Sianco", with lifetime sales of 7,000, is quite exceptional. But how many Welsh language novels have sunk without trace, with sales of under 500 copies? It would be interesting to see what the average sales figures are when ALL Welsh-language fiction published in 2016 is used as the basis for the calculations........


We know that in 2015-16 Welsh-language books were supported by the taxpayer to the tune of £348,000 for 224 titles, which achieved average sales of 829 copies. From the point of view of the taxpayer, was that money well spent? We would probably all agree that if the language is to be supported, its literature must be supported as well -- but the spending priorities need to be discussed rather more than has been the case in the past.  Writing and producing books that nobody wants is nit a terribly good idea.

Another question which refuses to go away is this:  "Are the sales reported by the Welsh Books Council REAL sales, involving real customers who pay real money over the counter in exchange for their purchases?"  There are ongoing rumours that unsaleable or unsold new books published in Wales are given away and counted as sales, and that returns are not counted against recorded sales figures at the Welsh Books Council distribution depot.  True or false?  There is another rumour that around 800 copies of every title published are sent out to the trade (and to libraries and educational establishments) on publication day, whether or not they are actually ordered or wanted.  True or false?

Here is a snippet from the article:

Author Dyfed Edwards, who is bilingual, feels that Welsh authors “should be writing what people want to read … I know that sounds obvious, but I think sometimes in Wales – and in Welsh-language publishing – we maybe exist in an echo chamber. Most of the voices are very similar, the tone of the books published are similar – though, of course, there are exceptions. We write for the same readers, many of whom are our fellow writers. We need populist and popular novels and we need experimental and challenging novels,” he said. “We need Dan Browns, Cormac McCarthys, Stephen Kings, Nicholson Bakers in the Welsh language. We need Kane and Abel and we need Catch-22.”

Edwards speculated that “Welsh-language readers are mostly middle-class, educated, very much involved in ‘Welsh’ life. Maybe we should be focusing on developing [an audience] among the less traditional Welsh-speaking readership. That will certainly mean populist, genre novels, aimed at the young,” he said.

He also called for a push to translate more books from Welsh. “Look what that’s done for Scandinavian fiction. It would draw attention to the fact that we have a Welsh-language publishing industry, even among Welsh speakers who perhaps don’t buy Welsh-language books at the moment. I live in England, and often people ask me, ‘Are books published in Welsh?’ I doubt they’d ask the same of Norwegian or Finnish or Icelandic,” he said.

Some interesting points there, but Dyfed appears to be somewhat naive about commercial realities.  Which Welsh books would he like to see published in English?  And would anybody actually want to buy them?