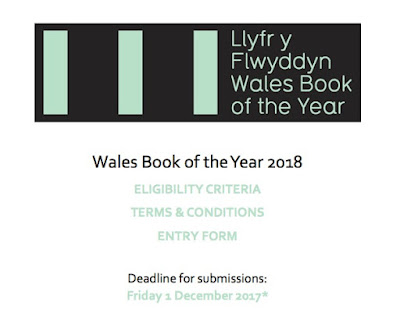 Sometimes a firm yet polite letter to the powers that be, pointing out the absurdity of something or other,  has the desired effect.  I have been upset for many years now about the fact that self-published titles were banned from entry for the Wales Book of the Year awards -- quite unlike the rules that apply to similar competitions in other parts of the UK.  So I wrote in July to Literature Wales, to Minister Ken Skates and to others who are key players in Welsh literature to complain about the self-publishing ban -- on the grounds that it was illogical, discriminatory and out of tune with modern publishing practice.

The eligibility criteria had included this as Rule 6:  All books entered MUST be “published by an established publishing house, which is here defined as a house that publishes a list of titles by a range of authors and distributes its books through recognised booksellers. Self-published books are not eligible.”

Suddenly, that rule has disappeared!  In the 2018 competition, self-published books may be entered.  So thanks are due to all concerned.  This is not of much use to me personally, since I don't have any new titles, but the rule change will be of particular help to poets, many of whom do publish their work via their own small publishing imprints.  I hope some of them will take advantage of the rule change, and get their entries in before the deadline on 1st December 2017.
Posted by BRIAN JOHN at 09:09