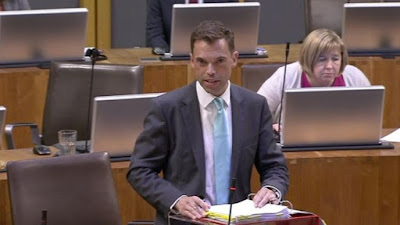 It looks as if the coordinated and very aggressive response from the literary establishment to the Medwin Hughes Review has been ultimately counter-productive.  Minister Ken Skates, who appointed the Review Chairman and panel, and who commissioned the Report on Support for Welsh Literature and Publishing, has made a new statement which is itself pretty forthright:

This is also reported in The Bookseller.  Essentially, the Minister accepts that Literature Wales and its friends have a right of reply to the direct criticisms contained in the Report, but he says that that process should have taken place behind closed doors. Instead, there has been a pointed and very personal attack on Medwin Hughes and his colleagues in the social media by people intent on obtaining maximum exposure and publicity.  That, he says, has "not been helpful" -- and he pleads for a period of calm assessment in a manner that respects the protocol of such things.

He who pays the piper calls the tune -- and we can probably assume that the things that Prof Medwin Hughes and his colleagues said in the report were the things that the Minister wanted to hear.  All in all, the future is not looking bright for Literature Wales.  I wonder how long it will be before staff members start jumping ship?
Posted by BRIAN JOHN at 14:04