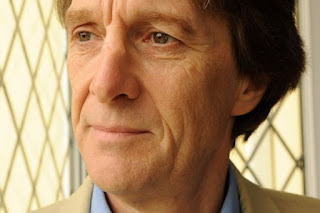 This is where the official Literature Wales web site is located:
http://www.literaturewales.org/home

and this is where the Blogger, Evening Post columnist and sometime writer Julian Ruck pours out his bile on the literary establishment in Wales:

Quite unabashed, he uses the words "Literature Wales" at the head of his site, and the official body has been unable to prevent this.

In 2014 Master Ruck got into trouble because his own publicist (how on earth did he manage to get one?) published a review of his latest novel on the Welsh Books Council web site while pretending to be "a member of the public"..............  In 2015 he was seriously injured by a car in a hit and run incident in Kidwelly, but is now apparently recovering well.  He is best known for his withering attacks on the "grant culture" of Welsh publishing, with the Welsh Books Council and Literature Wales having to suffer most from his full-blooded assaults.  But he does not have much time either for writers and publishers in Wales; according to him, they are all enjoying a cosy ride on the gravy train.

It's all very entertaining (apart from that nasty accident), and I am not surprised that the official Literature Wales (supported by the Welsh Government and the Arts Council) is not best pleased by some of the things our friend Julian says, but there is certainly more than a grain of truth in some of his comments -- and every self-respecting body should -- in principle -- respect and even encourage close scrutiny.  So there we are then.......
Posted by BRIAN JOHN at 13:13 No comments: Links to this post