On Angel Mountain back in stock 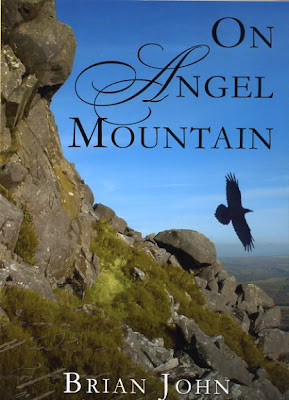 I have just had the delivery on the new printing of "On Angel Mountain."  This is my 7th printing, and I'm not sure how many other printings there were for the Corgi edition.  No matter -- total sales are now over 30,000.......

For the first time I have used a digital printing process -- from Cambrian Printers in Aberystwyth.  I'm very impressed with the quality.

Sorry if anybody has been trying to get a copy without success.  I have topped up most of the Pembs outlets -- just a few still to go.  You can always order online as well:

http://www.angel-mountain.info/
Posted by BRIAN JOHN at 08:18 No comments: 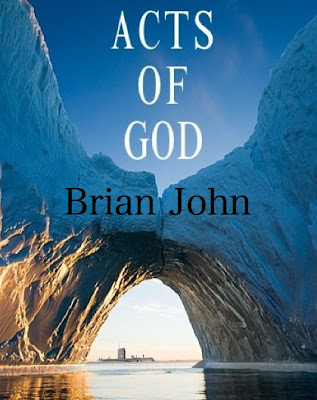 Many of my readers have been asking about the progress of my new novel, which they have heard rumours about from various quarters........  Well, the first thing to do is to make the point that the new story has NOTHING WHATSOEVER to do with Mistress Martha.  I have been feeling like a change of genre for some time, and with 8 novels about my feisty heroine done and dusted, I thought there was more than a little danger of getting stuck in a rut, living too comfortably in the comfort zone, and assorted other cliches.  So I thought that something more challenging might be a good idea.  Something aimed more specifically at a male readership (although there are many happy male readers of the Angel Mountain books, the fact of the matter is that most of my readers have been women, since women do seem to be more interested in historical fiction with a strong female lead character.  Strange, that....)

Anyway, for the last year or so I have been mulling over the basic storyline for a new novel set in Greenland, based very loosely indeed on my experiences as joint leader of the Oxford University East Greenland Expedition 1962.   (Yes, it was a VERY long time ago........)  But it was during the Cold War, and gradually a "Cold War Chiller Thriller" has taken shape. 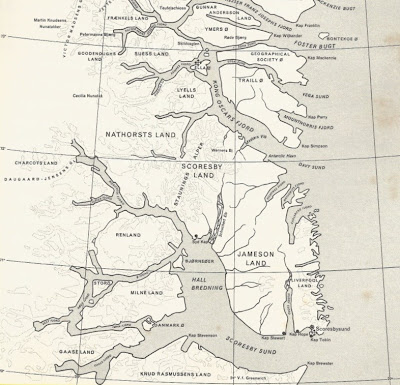 The central part of the East Greenland coast, the most spectacular fjord coastline on earth.

During the summer break in Sweden -- in June and July -- I worked out quite a detailed synopsis, and I started on the first draft of the novel at the beginning of August.  Now it's done.  Three weeks of fairly intensive work, culminating in a mad session last Tuesday during which I banged out the last 4 chapters and 16,000 words.  I thought afterwards, having worked so fast, that maybe it was all rubbish, but Inger has assured me that it was not, and that she really quite enjoyed the last part of the novel even though she is a woman.  So far so good........  now I need at least six male readers to have a critical go at the text, and to be honest with me!  After that, I have to decide what to do with the manuscript -- agent, publisher, Ebook, self-publication?   Decisions, decisions......

I have made two rather nice location maps, so that people can follow the story more effectively.  Here they are (click to enlarge): 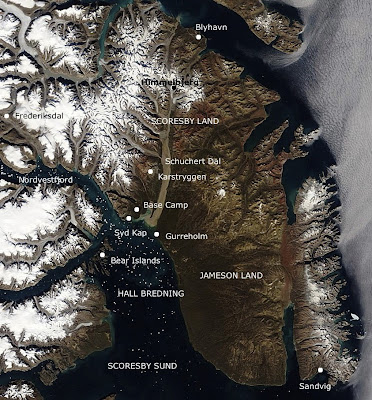 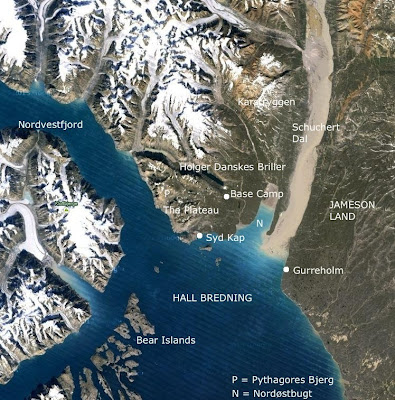 I am of course sworn to secrecy as to the contents of the story, but here is a draft cover blurb, just to give a feeling for it:

This is a fast-moving thriller in the tradition of Alistair MacLean, Clive Cussler and Hammond Innes, set in a magnificent yet deadly polar environment. It is also an inspiring story of comradeship and survival against overwhelming odds.

At the height of the Cold War in 1962, ten young men arrive in the Arctic wilderness of East Greenland, on an expedition from Oxford University. The party is led by Ed Lawson and Stephen Hanna, both just 22 years old. They expect to enjoy the adventure of a lifetime, and to undertake scientific work in the most spectacular fjord landscape on earth. But as soon as they arrive, things start to go wrong, and following a series of close encounters with death they realize that their misfortunes are not occurring purely by chance. The explorers are too inquisitive and too intelligent for their own good, and after some weeks in the field they realize that they know too much, and that they are being hunted down by an invisible and implacable enemy. Prematurely their research plans have to be abandoned, and their adventure turns into a fight for survival. As the death toll mounts, the people of a small Inuit settlement are also caught up in a conflict which they want nothing to do with. At last the explorers get angry, and although they have no weapons and no means of transport, they are fit and they know how to survive in the Arctic. Their only option is to go onto the offensive, in the full knowledge that they will probably not come out of the conflict alive.

So there we are then.  For developments over the coming months, watch this space........

The other thing I have done, to enhance the reading pleasure of those who might be interested in a story of this type, set in the real world, is to put together a rather splendid collection of images from the key locations -- Kjove Land, Syd Kap, Bear Islands. Schuchert Dal, Stauning Alps, Nordvest Fjord, Jameson Land etc.  The pictures can be seen here:

Just one other thing.  Because of possible sensitivity, I have changed three key place nemes in the manuscript.  So Mesters Vig has become Blyhavn, Scoresbysund (the settlement) has become Sandvig, and Malmbjerg (Erzberg) has become Himmelbjerg.  Is that all clear?  Good. 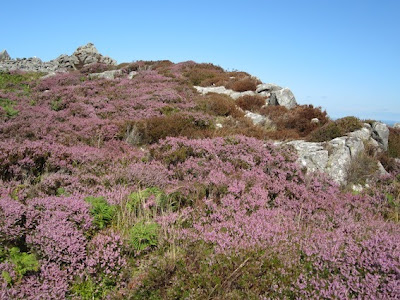 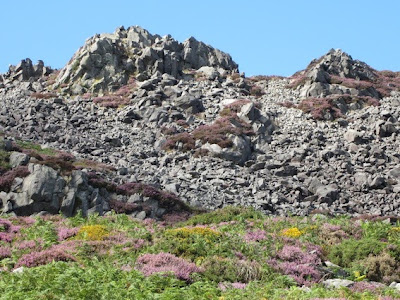 In case anybody has been wondering, the seventh printing of "On Angel Mountain" should be with me from the printers tomorrow -- been getting quite a few requests for it, but sadly I have been totally cleaned out of stock at the Greencroft Books warehouse (ie our attic....)

So hang in there -- I'll try to get stocks out on Friday.

In the meantime, here are a couple of recent pics to remind us that Angel Mountain is as beautiful as ever -- typical autumn colours, and I don't think I've ever seen the heather looking better!
Posted by BRIAN JOHN at 06:48 No comments: 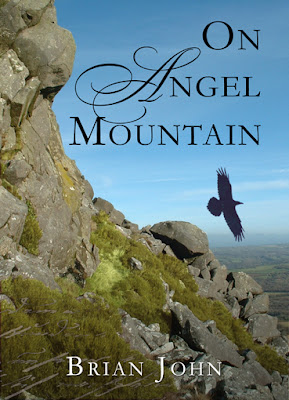 Reprint time again -- this time for "On Angel Mountain."  Having done the sums, I reckon that this title has now sold 30,000 copies in all editions, excluding Kindle downloads and audiobook sales.  I suddenly realized that I was out of stock, and having reclaimed some stock from the Welsh Books Council warehouse in Aberystwyth, I have now sold out of that as well.  So the old favourite keeps on selling.  This will be the 7th printing.......

This is my first venture into short-run digital printing, and I'm using Cambrian Printers in Aberystwyth, who did an excellent job for me with "Ghostly Tales from Pembrokeshire."  Conventional offset printing is not really worthwhile unless you want 1,000 or 2,000 copies at least -- and in these straightend times, who can afford to hold stock at very high levels?  So with the short-run digital process I can go for smaller quantities of a few hundred, and still have a reasonable mark-up on copies sold to the trade.  Naturally enough, I do not want to increase the cover price.

Interesting experiment.  Watch this space.
Posted by BRIAN JOHN at 10:58 No comments: