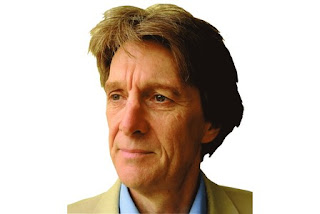 Last August I gave a bit of space to the spat between one Julian Ruck and the Welsh publishing industry:

It has been apparent for quite a time that the publishing establishment is not best pleased with him, but things have now turned rather nasty, and he has complained to the police about harrassment and threats to his safety:

Here is an intriguing account of a talk given by our eccentric friend and effectively disrupted and destroyed by a contingent of Welsh literary people -- in a manner that would not have been out of place in an eighteenth-century alehouse:

I'm not into aportioning blame here!  As in most wars, it probably needs to be apportioned between the angry parties.

There is also a spoof blog site, here:

Apparently Julian is not best pleased about this site -- which is a bit rich, since he himself runs a spoof website designed to cause confusion amongst people looking for Literature Wales on the web.... (Well, I think it's him that runs the site, but nobody owns up to being in change of it.... perhaps he will tell us if it isn't him.)

Here is another write-up in the press, which appeared in January:

Taxpayers in England, Scotland and Northern Ireland are helping fund millions of pounds worth of grants to Welsh authors whose books often sell only a handful of copies, it has emerged.

In the past five years the Welsh Books Council and Literature Wales have received more than £42m from the Welsh Assembly and Arts Council Wales, which in turn receive their funding from Westminster.

Welsh authors can apply for grants of up to £10,000 to work on any kind of book, and they keep the money even if their work is never published.

Some of the money is used to fund advances for Welsh “celebrities” to write their memoirs, even though there is virtually no public appetite for many of the books.

Last year alone the Welsh Books Council received £7.6m of taxpayers’ money. It distributed £1,853,500 towards the publishing of Welsh language books, including £365,272 which went directly to authors. Another £751,465 was spent on English language books by authors living in Wales.

Over the past five years the WBC has received £39m of taxpayers’ money, with another £3.85m going to Literature Wales.

Among the Welsh celebrities whose books were subsidised by taxpayers’ money were the comedian Owen Money, who reportedly received £6,000 from the WBC to write his autobiography, Money Talks, and the musician Mal Pope, who was given £4,000 by the WBC to write his memoirs, Old Enough To Know Better.

Other books which have benefited from the scheme include At Arms Length, the autobiography of the former BBC Wales controller Geraint Talfan Davies, which sold just 176 copies in four years. Although Mr Davies did not receive a direct grant, his publisher received money from the WBC.

Julian Ruck, an author and freedom of information campaigner who obtained figures on how some of the money has been spent, said: “This is nothing less than gold-plated dough for people who do not even have to produce a book to get a grant, they only have to show that they intend to write one.

“In England, people who are given arts grants have to give up their time to teach two days a week so that they are not getting money for nothing, but in Wales people are being paid to stay at home and write.

“In the era of e-books, why is it necessary for the taxpayer to subsidise traditional books for such a tiny readership?”

A spokesman for the Welsh Government said funding for the WBC had been cut to £4.1m for the 2012-13 financial year and added: "This funding is channelled towards supporting the publishing industry in both Welsh and English languages.

"Detailed monitoring arrangements are in place to ensure that this funding is spent appropriately. Book sales through the Welsh Books Council distribution centre saw an increase in the last financial year which is very encouraging given the current financial climate."

Yesterday The Telegraph reported that BBC Radio Cymru, which receives £13.5m of licence fee money, is having to play English language music to fill airtime after it failed to reach an agreement with Welsh musicians over royalty payments.

The Welsh artists want to be paid around ten times the current rate every time one of their songs is aired.
Posted by BRIAN JOHN at 04:43 No comments: Links to this post