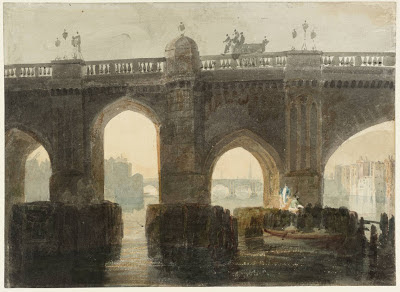 The old London Bridge, painted by Turner in 1794.  By this date the old buildings which ran across the length of the bridge had all been demolished, for safety reasons.

Mr and Mrs Fitz were Jane's adoptive parents, and Mr Fitz was James's employer.  Research has revealed that the banns for James and Jane were read out at St Mary Abbots Church for the three weeks prior to the wedding date, 25th November 1810.  It is something of a mystery that Mr and Mrs Fitz did not get to know of that;  we can only assume that they were not regular churchgoers and that they did not know any members of the congregation.  We can imagine that the young couple must have been on tenterhooks, for fear of somebody or other saying: "Ah, my dear Mr and Mrs Fitz, we hear that your delightful niece is about to be married!"

Following the secret marriage of the unhappy couple, the young man was packed off to Paris by his employer.  Legend has it that he travelled on the same day as the wedding, but somehow or other the marriage was consummated, for on 26th August 1811 (exactly nine months after the wedding) Jane gave birth to her first son, named Abel Worth Hoole, in Margate.  One wonders whether the couple had made love on the night before the wedding, or even before that.  One also wonders whether that is what precipitated the decision to be wed in secret -- but we will never know the truth on that score.  Also, one wonders why the birth happened in Margate...... but we are getting ahead of ourselves.

With James out of the way in France,  Mr and Mrs Fitz resumed their attempts to get Jane to marry the chosen army officer, whose name we do not know.  Jane, now that she was married, resisted this pressure even more vehemently than before -- and although she loved her uncle and aunt dearly relations became very strained.  The situation grew more and more embarrassing, and at last Jane could stand the deceit no longer.  She pulled out the wedding ring on its silk thread and told them the truth.  Here uncle and aunt were furious -- far more angry than Jane had expected.  James was immediately called back from Paris and sacked from his job, and he was forced to take Jane away and to set up home with her somewhere else in London.

How they survived is not known -- but Jane might have had some money of her own put away, and it may be that her brother Edward (who lived in Hart Street, Bloomsbury Square) helped out in some way.  She also had eight sisters, some of whom lived in London, and maybe there was also sympathy and support from them and their husbands.  We assume that James might have found other work as a secretary, and we also assume that the couple and their small child did not sink into abject poverty.  Did they live in Margate at some stage?  It's quite possible.  The only address we have for them is Selby Place, New Road, London -- the address recorded  on the date of their departure for South Africa on December 3rd, 1819.    After some years there was a partial reconciliation with Mr and Mrs Fitz, although Jane claimed to the end of her life that they never really forgave her for marrying James.  In due course another baby arrived.  He was christened James Cotterell Hoole, and he was probably born in London on 18 May 1816.  At some stage during these dark years, James was swept along by the spirit of one of the many religious revivals of the early nineteenth century, and became a Methodist.  Jane said she "did hope that he would get over it" -- but he never did, and he remained a staunch Methodist for the rest of his life.  Indeed, Jane herself became a Methodist too, some time before their move to South Africa.

James was always liable to sink into black depression, and he always blamed himself for taking his wife away from what might have been a life of comfort and wealth.  Their marriage was a very happy one, but that was no great consolation to him.  One day, his fortunes were at a very low ebb.  We have to assume that he had lost his job, or that the couple had spent all of their savings.  At any rate, James was penniless and very miserable indeed.  He had no idea how he was going to keep his young family above the bread line.  He walked down to London Bridge -- was he so depressed that he was contemplating suicide by flinging himself into the Thames?  But then something strange happened........