Hit and run on the mountain 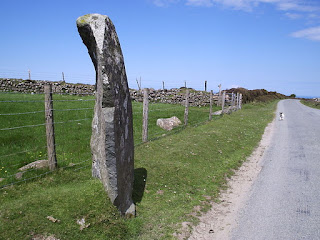 The papers have been full of it -- even the Sun, the Daily Mail and the Telegraph.  The ancient standing stone called Bedd Morris (which may or not be all that ancient) has been broken off by somebody who hit it with a truck or a tractor and who then (so we are reliably informed) "sped off into the darkness."  Very sad.  So there it was, broken off and lying at the roadside, causing no end of fun and games, and causing the National Park, the Town Council, Cadw, Uncle Tom Cobbley and all to make statements to the press and to vow that it would be repaired and restored to its rightful place.

Now the NPA has apparently taken it away to a secret location for safekeeping, and before it is bedded in concrete the archaeologists are going to have a little look to see if there is anything interesting in the hole where the stone should be standing.

Watch this space for further exciting reports......
Posted by BRIAN JOHN at 13:07 No comments: Links to this post

Carningli -- the light and the dark

I'm intrigued by the manner in which one location -- in this case Carningli -- can make different impacts upon different people.  I have always thought of it as a place of light and serenity, but in Bob Reeves's poem it is a place of terrible blackness -- captured in my son Stephen's musical setting.

Posted by BRIAN JOHN at 12:38 No comments: Links to this post

Mistress Martha and the tourists 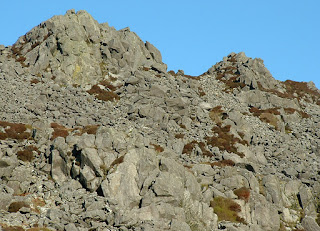 I recently received this kind letter from a fan of the series, and it reminded me of the dilemma which arises when a "quiet place" becomes rather famous.  There is no doubt in anybody's mind, in these parts, that since the publication of the first Angel Mountain novel ten years ago there has been a great increase in tourism on the mountain and in the neighbourhood -- so I have to accept some responsibility for that.  You can see that in the wear and tear on the mountain footpaths, and simply in the frequency with which I encounter others when I go up onto the mountain for my own walks.  Many of those who climb the mountain are referring to it not as "Carningli" but as "Angel Mountain" -- and many are actually looking for Martha's cave!  Good thing or bad thing?  On balance, the effect of this "literary tourism" has to be good -- and I think all of the holiday cottage owners and B+B operators would agree with this.  They are after all locals who are seeking to make a decent living.  Property prices in the Newport area are certainly astronomical -- but they were high (as compared with other places within the National Park) well before Mistress Martha appeared on the scene........  and the phenomenon of young local people being unable to afford local properties goes back a long way.  That, sadly, is a matter of supply and demand -- and it is the way the market operates.

By and large, I am personally very happy that a new generation of people -- book readers -- have discovered Carningli and have started to think of it as "their special place".  There are few enough serene places left in this world, and Carningli continues to be one of them, except, maybe, for a few weeks at the height of summer.


"I have just finished reading the previous five volumes for the third time, and once again have been brought to tears of both laughter and sadness in reading them. I find it hard to believe that it is all a work of fiction, brilliant!
I have holidayed in the area three times now, the first time when we visited Cilgwyn Candles where I picked up a copy of "On Angel Mountain" which after reading it and its sister volumes has resulted in me holidaying in the area twice since, all three times in holiday cottages -- the last time in a holiday cottage in the shadow of Carningli.  I have mixed feelings about this, as whilst holidaying in the area we are bringing in much needed revenue -- but I feel that by encouraging the holiday cottage industry we are out pricing the locals in the property market.  Perhaps I am following Mistress Martha's philosophy in a modern sort of way!
Anyway I now have a touring caravan so any future visits to your beautiful part of the world will be by such means."
Posted by BRIAN JOHN at 01:00 No comments: Links to this post 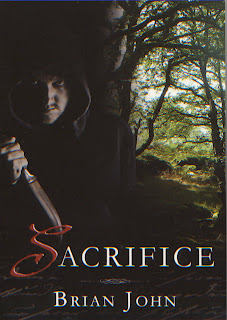 I have just discovered this review of "Sacrifice" on the Welsh Books Council site.  Well, somebody seems to have enjoyed it, and maybe I'd better keep going......
Gwales Review
Brian John could not let Martha die; his readership was in denial. Hence Sacrifice, his only book not to incorporate ‘Angel Mountain’ in its title, though it is very much part of the saga which started with On Angel Mountain.

In this latest tale we join our heroine Martha Morgan, mistress of Plas Ingli, a small estate high on the slopes of Mount Carningli in north Pembrokeshire, in early 1808 and end with the birth of her son, Morfran, in the spring of 1810. At the start, the widowed Martha is of an exceptionally happy disposition as she and her five young children arrive at the fair in Portfield. Her mood is lightened still further with the meeting of a young Irishman by the name of Dominic Cunningham. What follows sets tongues wagging.

Not all remains well for Martha for long. Her 'dear friend' Joseph Harries is trampled by a herd of bullocks. This incident is quickly followed by a more worrying occurrence, though no one is hurt. George Lewis, a local lawyer and friend of Martha's, has his house burnt down, and arson is suspected.

Then there is a most disquieting and sinister happening. Will Owen, Martha's shepherd, is found in an exceptionally bad way with three stripes carved on his chest and a note written in his own blood: 'The RHIWALLWN FROM GRUNDDNEI.' The mystery is — who and why? Martha herself is targeted. As the novel unravels, we learn of four suspects who call themselves surveyors, macabre figures with whom Martha comes face to face, and her worst fears are realised.

Brian John is the master of suspense, though it is not all blood and gall. His descriptive prowess is eloquent. We are drawn to Carningli, the mountain where the Angels and the Ravens reside — a mystical place where Martha communes with nature, and the sheer majesty of the Pembrokeshire countryside. John's characters as usual are full of colour and verve; they leap off the page. One can understand why the Angel Mountain sagas have become something of a cult. Pick up any of the series and I guarantee you will want to read them all.

Well, Brian John, how about another?

Norma Penfold
A review from www.gwales.com, with the permission of the Welsh Books Council.
Posted by BRIAN JOHN at 09:53 No comments: Links to this post 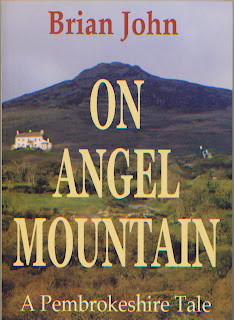 The first edition of "On Angel Mountain" was published exactly ten years ago, so a small celebration is probably in order.  Over the course of the decade I have written another six novels about the feisty heroine, and total sales for the series (all editions) are now creeping up towards 65,000.  Soon I'll hit the 25,000 mark for "On Angel Mountain", which has gone through seven printings, and which is still available in Greencroft, Corgi and audio editions.

I have a rather soft spot for the very first jacket, shown above.  It has "A Pembrokeshire Tale" as the subtitle, so if you see it anywhere, snaffle it up -- it may be worth something in the future!!
Posted by BRIAN JOHN at 13:31 No comments: Links to this post