Had another excellent walk on Carningli -- very icy underfoot, and lots of snow still present.  There was quite a cold southerly wind -- should have been coming from the north, but the mountain is a very contrary place.  Managed to tuck down under an overhanging rock for my thermos of hot cocoa -- it was quite cosy!  I noticed that the sheep do just the same -- I actually think they head UPHILL overnight and spend the hours of darkness tucked up against the rock faces and in little hollows sheltered from the wind.  Maybe it's more cosy than spending the night on the open common, lower down, where there is nothing to break the force of the wind.

Oh, and there was one raven up there besides me.  Mistress Martha, no doubt, keeping an eye on me....
Posted by BRIAN JOHN at 13:11 No comments: Links to this post

Well, this snow is very pretty, but it does make life a bit difficult.  Had to cancel a signing session in Crymych yesterday (although I did manage to make it for another one in Cardigan) and today there is no way I am going to make it to Tenby.  In the night we had a heavy accumulation of hail -- the road is thickly blanketed, and only one 4x4 has been past so far........ more snow forecast for this morning.  Time to stay put and think beautiful thoughts!
Posted by BRIAN JOHN at 00:24 2 comments: Links to this post 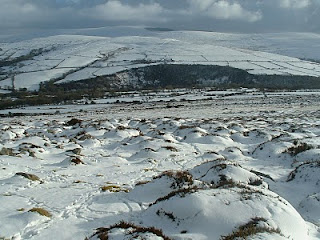 With the festive season almost upon us, time for a reminder of what Christmas was like for a minor gentry family in Martha's time.  Here is an extract from Martha Morgan's Little World:

The traditions associated with Christmas and New Year were probably the most important of all in the rural community of North Pembrokeshire. It was the only opportunity that people of all classes had for relaxation and feasting over a period of at least a week.  True, animals still had to be fed and watered, eggs had to be collected, and cows had to be milked, but at that time of uncertain winter weather it was possible to leave the fields to themselves for a few days without worrying too much about to the consequences.
So this was the time for the gentry to demonstrate their generosity to friends, neighbours, tenants, and labourers and their families, and thereby to enhance their reputations.  Of course, that generosity would vary from year to year depending upon the success or failure of the previous year’s harvesting and trading activities.  As I have tried to demonstrate in the pages of Martha’s diaries, there were fat years and lean years, and if things were desperate financially Christmas would almost literally be cancelled.  It also happened that if there was a death in a gentry family, or some other tragedy, that family would not  be expected to lay on lavish feasts and other ceremonials for the sake of others.  On such occasions some of the less affluent families of the neighbourhood would organize Christmas on a less lavish scale, thereby spreading the load.
But if times were good, much was expected of a squire and mistress of a respectable estate, and everybody involved could look forward to the festive season for many weeks.  The necessary advance planning tested the skill and resolve of even the most efficient housekeeper, and the quantities of food and drink required were impressive indeed.  I have tried to indicate this in the descriptions of the festive season in various parts of Martha’s story.  The catering details varied from one estate to another, but I have built into the Plas Ingli Christmas just some of the conventions gleaned from contemporary descriptions from real gentry houses.
There is no point in repeating the detail here, but we must also note that Christmas and New Year were the times when complicated payments and repayments came into play between landlord and tenant, master and servant, and even between the members of extended families.  As explained in the pages of the novels, there was little cash moving about in the North Pembrokeshire farming community,  and “in kind” payments were routine instead of (or as part of) rental payments.  So at Christmas time geese, ducks, eggs, chickens, butter, cheese, and all sorts of other products would be contributed by labourers and tenants to the mountain of food being assembled by the housekeeper of a well-run estate.  And the hospitality provided by the host and hostess was not simply a matter of benevolence either, for they paid very little in the way of wages to those who worked for them.  The Christmas extravaganza was actually owed to servants, labourers and tenants in exchange for their loyalty and hard work during the course of the year that was now coming to an end.  The Christmas feast, wildly excessive though it often was, was actually present in every unwritten contract, and everybody knew it.
Posted by BRIAN JOHN at 09:11 No comments: Links to this post 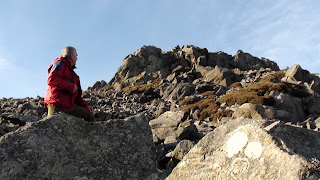 Been at the Newport Winter fair today, trying to sell some books and candles, with Inger and I taking it in turns to brave the cold.  Had a rather bizarre experience.  A lady whom I had not met before (and who didn't know who I was) told me about the Angel Mountain novels.  She said that a lady who lives in one of the farms on the side of Carningli told her that the chap that wrote the stories used to go up to the top of the mountain and stay there for hours, waiting for inspiration to come.  And then, one day, lo and behold, along came the inspiration for the novels, and the rest is history!!

Of course, the truth is rather more mundane than the legend, but it was strange to hear the story put in just those terms.......  I suppose that before long, as the story evolves, there will be angels and ravens in there as well.
Posted by BRIAN JOHN at 11:00 No comments: Links to this post 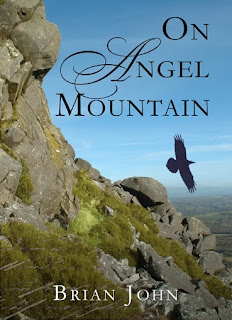 I like to encourage as many readers as possible to buy their Angel Mountain books through their local bookshops, but many local bookshops (especially outside West Wales) are not keen to stock "small" titles, and they are not all that good at ordering them in for customers either.  It's a pity to have to say that, but it's true in far too many cases.  There is no excuse for any small bookshop, anywhere in the UK, for failing to get virtually any title in print for a customer within a few days -- my books are all on the Nielsen data base, and they are all instantly available either via the Welsh Books Council distribution centre, or through wholesalers like Gardners and Betrams.

However-- if you are desperate, or have to do things over the web, please do not go to Amazon, but go straight to my direct shopping pages:

There you can order any of my titles just with a few clicks of the mouse, and use the secure PayPal payment system.  I get a confirmed order from Paypal within a few minutes, and we can then process orders immediately.  And I'll even sign the books for you, if you give Mr PayPal your instructions......
Posted by BRIAN JOHN at 07:08 No comments: Links to this post